Multipolarity: An End to US Hegemony??

I posted this a few months ago at Everybody Comes from Somewhere. Lately I've been thinking it sums up the only place I see much hope these days.

A few months ago I ran across this quote from Glen Ford on The Black Agenda Report:

There's a term going around in the corporate media called, "multi-polarity." It's really a euphemism, designed to describe the death of white supremacy over the planet. It's been a long time coming - more than five centuries, since the European invasion of the rest of the continents began, resulting in the death of untold millions of people. Whole civilizations were wiped away, to make way for a northern European global sphere of influence. Now that era is coming to an end.<...>

China, India, Brazil and South Africa have joined in a political and economic compact to resist the domination of the United States and Europe. The political-economy of capitalism dictates that these nations must be dealt with. The social realities of the United States dictate that it cannot raise a military force sufficient to suppress the dark masses. Europe learned this lesson a generation ago. Now it is time for the white supremacist Americans to learn the same lesson: they cannot rule the world.

This sounds interesting. I wanted to learn more about "multi-polarity," so I did just a little bit of research. Turns out it is actually a concept that was developed by Jacques Chirac several years ago. Here's how wikipedia defines it:

Multipolarity in international politics describes a distribution of power in which more than two nation-states have nearly equal amounts of military, cultural, and economic influence.

What I found is that, while this concept might be being discussed in the corporate media, we certainly haven't heard much about it - but the rest of the world is talking about it quite a bit. I'd like to share a couple of examples with you.

Here's an example from The Asian Times in an article by Michael Weinstein from June 2004.

The question is whether the Iraq adventure marks a watershed in world politics, in which the currents that once ran toward multilateralism in the decade following the fall of the Soviet Union have now shifted in the direction of multi-polarism. Well before the second Gulf War, China, Russia and France had voiced preferences for multi-polarism, in which American leadership is replaced by negotiation among regional power centers, among them North America. The Iraq war may have tipped the balance so that it favors the multi-polarists. If the United States cannot be trusted to take the interests of allies and collaborators into account in its strategic policy, these governments will seek to retrench, moving to gain as much control as possible over their regions, so that they can exert a veto on American interventions into them. Although each regional power center has its own independent interests, they all have a shared interest in fending off American dictation and, therefore, constitute an incipient defensive alliance.

Multi-polarism is a containment policy against the United States - the one-time hyper-power that has revealed its vulnerability and the limits of its military control.

And here's something that Hu Jintao, the current President of the People's Republic of China, said back in 2001:

"Multipolarity constitutes an important base for world peace and the democratization of international relations is an "essential guarantee" for that peace", said Chinese Vice President Hu Jintao on Monday during his five-nation tour in Paris.<...>

"The multi-polarity composes an important base for achieving a durable peace on this planet," he said. Such multi-polarity is conducive to building a new, just and reasonable eco-political order, setting up a relatively-stable international political framework and promoting exchanges and cooperation, he added.

What Washington has most essentially lost is acquiescence to its leadership. Other powers no longer have any compunction about opposing U.S. policies and preferences when it is not in their own independent interests to follow them. It is a game of every power for itself, in which each regional power center cooperates with others when it shares common interests with them and opposes them when interests conflict. The result is the absence of a single paradigm of world order or even of a coherent pattern of alliances. In their place are coalitions of convenience that -- taken together -- have no consistent direction.

Currently the major presumptive power centers are China in East Asia, India in South Asia, Brazil in South America, the Franco-German combine in Europe and Russia at the center of its multiregional periphery. As an area of contention that is internally divided and subject to strong pressures from outside powers, the Near East has no single presumptive power center, although Iran is bidding for that role. There is no state in Africa that has the resources to be a hegemon, although Nigeria and the Republic of South Africa might take that position or share it in the future. The U.S. has secure dominance in its North American base, but its global reach is in question as it faces challenges and tests from ascending powers elsewhere.

There are articles that discuss the dangers of this growing multipolarity. Like this one from The Guardian that was written during Israel's attacks on Lebanon.  But just look at the title and tag line for the article:

Lebanon, North Korea, Russia ... here is the world's new multipolar disorder.The unipolar moment of American supremacy has passed. But the new multipolarity may prove to be very nasty indeed.

I think this makes sense because I imagine there is a lot of work to "hedge our bets" going on all over the world with respect to the failing state of the US. And I actually think its a hopeful sign. Just as the founders of this country recognized the need for a "balance of powers" in our constitution, the world needs a balance of powers for any sense of security and stability to develop. It might be a bit of a roller-coaster ride to get there - but I think this is a path that has some promise. 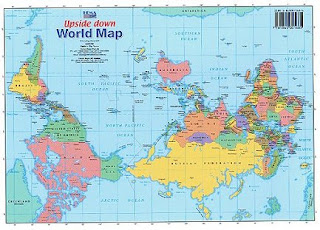