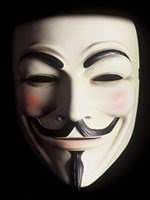 James at Mahatma X Files reminds us that today is the 402 anniversary of the Gunpowder Plot that was the inspiration for the movie (and earlier graphic novel) "V for Vendetta." I found this to be one of the most powerful movies I've seen in a long time because it speaks to the heart of what I think is going wrong in our culture today...the ascendency of fear as a driving force.

I'd like to join James in remembering the words of the character "V" in the film that are so poignant for our times today:


How did this happen? Who's to blame? Well certainly there are those more responsible than others, and they will be held accountable, but again truth be told, if you're looking for the guilty, you need only look into a mirror. I know why you did it. I know you were afraid. Who wouldn't be? War, terror, disease. There were a myriad of problems which conspired to corrupt your reason and rob you of your common sense. Fear got the best of you, and in your panic you turned to the now high chancellor, Adam Sutler. He promised you order, he promised you peace, and all he demanded in return was your silent, obedient consent. Last night I sought to end that silence. Last night I destroyed the Old Bailey, to remind this country of what it has forgotten. More than four hundred years ago a great citizen wished to embed the fifth of November forever in our memory. His hope was to remind the world that fairness, justice, and freedom are more than words, they are perspectives. So if you've seen nothing, if the crimes of this government remain unknown to you then I would suggest you allow the fifth of November to pass unmarked. But if you see what I see, if you feel as I feel, and if you would seek as I seek, then I ask you to stand beside me one year from tonight, outside the gates of Parliament, and together we shall give them a fifth of November that shall never, ever be forgot.