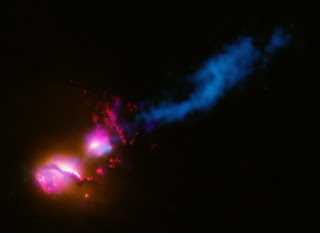 A powerful jet from a super massive black hole is blasting a nearby galaxy, according to new findings from NASA observatories. This never-before witnessed galactic violence may have a profound effect on planets in the jet's path and trigger a burst of star formation in its destructive wake.

Known as 3C321, the system contains two galaxies in orbit around each other. Data from NASA's Chandra X-ray Observatory show both galaxies contain super massive black holes at their centers, but the larger galaxy has a jet emanating from the vicinity of its black hole. The smaller galaxy apparently has swung into the path of this jet.

The effect of the jet on the companion galaxy is likely to be substantial, because the galaxies in 3C321 are extremely close at a distance of only about 20,000 light years apart. They lie approximately the same distance as Earth is from the center of the Milky Way galaxy.

Another unique aspect of the discovery in 3C321 is how relatively short-lived this event is on a cosmic time scale. Features seen in the Very Large Array and Chandra images indicate that the jet began impacting the galaxy about one million years ago, a small fraction of the system's lifetime. This means such an alignment is quite rare in the nearby universe, making 3C321 an important opportunity to study such a phenomenon.

Here's some music to go with the experience: