Will the young people of this country engage in political change? They will if Nezua at The Unapologetic Mexican and Kyle at Citizen Orange have anything to say about it. 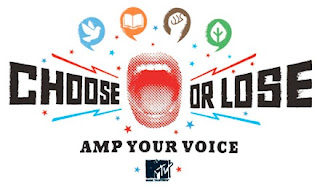 These two powerhouse voices of the diversosphere have been chosen by MTV to be part of the Street Team '08 that inlcudes 51 young vloggers that will cover the presidential election through next November.

The presidential candidates can run, but it will be hard for them to hide from the horde of citizen journalists tapped by MTV's Choose or Lose '08 to cover the race for the White House. A group of 51 youth reporters — one from each state and Washington, D.C. — will follow the 2008 elections and deliver weekly multimedia reports tailored for mobile devices.

Using short-form videos, blogs, animation, photos and podcasts, the reports will be distributed through MTV Mobile, Think.MTV.com, more than 1,800 sites in The Associated Press' Online Video Network and a soon-to-launch Wireless Application Protocol site. The Street Team '08 reporters were carefully selected after an extensive nationwide search, and they represent every aspect of today's youth audience — from seasoned student-newspaper journalists to documentary filmmakers, the children of once-illegal immigrants and community organizers.

They are conservative and liberal, from big cities and small towns, but all are tied together through a passion for politics and a yearning to make the youth voice heard during this pivotal election. The correspondents will begin reporting early next month after an intensive MTV News orientation in New York, during which they'll be armed with laptops, video cameras and cell phones and challenged to uncover the untold political stories that matter most to young people in their respective states.

As Kyle points out in his post, this story has already been picked up by The Guardian, The Associated Press, and Fox.

Here are the videos from these guys that got them this gig. First of all, Nezua's introduction - I just LOVE this one!!!

The more serious part of Nezua comes through in this issue video he submitted as a finalist:

Here's Kyle's submission - he who is "Mr. Punk Jingle With a Message."

As exciting as all this is, these two are being their own transparent and honest selves in putting their concerns about this out there for all of us to see. Nezua worries that Viacom, owner of MTV, may try to influence his content.

At this point, it is only fair to add that while it is very thrilling that I am getting paid to do my art/filmmaking/documenting/reporting, I am getting paid to do this by Viacom. So let that stand for the record, and tho I will not recuse myself from blogging/vlogging on any issue whatsoever, it must be remembered that on certain issues there is bound to be some conflict as I would rather not lose my platform and weekly check. But again, you can count on me to have the same bias toward telling the truth that I do my best to engage, and have, since this blog's conception. We'll talk more after the onslaught of legal orientation that (I am guessing) awaits me in Manhattan. If anyone tries to curtail too much what I feel is important to talk about, it may be a shorter gig than expected. Watch this page.

And Kyle is worried about being a "scab" because MTV freelance reporters are striking due to reductions in benefits.

But I think Kyle sums up the importance of this task beautifully with this:

More importantly, though, this is about putting power in the hands of youth and giving them a voice. I know of so many inspiring young people that are wasting away their lives by putting off change until tomorrow. A common perception that I often butted heads against at Harvard was the idea that you had to build power before you could make significant change. In other words, a lot of young people postpone using the best years of their lives for change to become prominent academics, lawyers, doctors, politicians, or business leaders. Before long, the reality of a family, bills to pay, and favors owed stifles any chance that they have at real change. Some of them will bankroll the revolution, but the world is short on revolutionaries.

This tone might be too extreme for some, but the type of revolution I'm talking about certainly isn't extreme. I'm talking about the revolution that each new generation brings. A generational revolution is not about dogmatic choices like the choices between being radical or reactionary, Republican or Democrat, a meat-eater or a vegetarian. A generational revolution is simply about each young person striving to be themselves. If every young person is able to follow their hearts and develop to their fullest potential, I can't imagine that utopia is too far off.

Go out there and start the revolution guys!!

But I guess if this old lady is going to comment about young people starting a revolution, I'd better catch up with the times. So, maybe I'll ammend that to say, "JAM SUCKA JAM!!!"