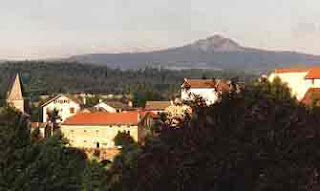 The story of Le Chambon is written in a book titled Lest Innocent Blood Be Shed by Philip Hallie. It is the story of the people there who were responsible for saving the lives of over 5,000 Jewish refugees - mostly children - during World War II.

I read this book a couple of years ago and have since then found myself thinking about it quite often. It is a powerful story of ordinary people who had a huge impact in the world by living out their values of peace and human dignity in the face of totalinarianism and violence. Many have wondered over the years why a small town like this would take a stand when so many others were choosing to look the other way. Philip Hallie tries to answer that question in his book.

In the mid 1930's Andre and Magda Trocme moved to Le Chambon, as Andre was to become the town's minister. It was the "lived-out" convictions of these two people who influenced the town to open their hearts and doors to those in need.

Andre Trocme was committed to non-violence and is described as holding an agressive celebration of life, which he brought to Le Chambon:

But he did not give it (this celebration of life) to Le Chambon in the way that one gives money to the poor or gifts to friends. Trocme gave his aggressive ethic to them by giving them himself. Aside from the distinction between good and evil, between helping and hurting, the fundamental distinction of that ethic is between giving things and giving oneself. When you give somebody a thing without giving yourself, you degrade both parties by making the receiver utterly passive and by making yourself a benefactor standing there to receive thanks - and even sometimes obedience - as repayment. But when you give yourself, nobody is degraded - in fact, both parties are elevated by a shared joy. When you give yourself, the things you are giving become, to use Trocme's word, feconde (fertile, fruitful). What you give creates new, vigorous life, instead of arrogance on the one hand and passivity on the other.

Prior to the time any refugees were sheltered in Le Chambon, the Trocmes lived out this ethic of the celebration of life and the giving of oneself. Andre led resistance efforts against the Vichy government and preached sermons about it.

As his sermons showed, he believed that if you choose to resist evil, and you choose this firmly, then ways of carrying out that resistance will open up around you.

But Andre was not naive about the evil he was resisting. At one point, he was arrested and questioned by a police captain who "was convinced that anybody who had been arrested was not only guilty of a crime but beneath contempt." Here's how Hallie describes Andre's reaction:

This was a moment Trocme would never forget. In fact, his overnight stay in the police station in Limoges changed his view of mankind. He discovered people like the captain - patriotic, sincere, but above all, severely limited. These people were capable of repeating hate-ridden cliches without any concern for evidence or for the pain of others. Before he entered that police station, he thought the world was a scene where two forces were struggling for power: God and the Devil. From then on, he knew that there was a thrid force seeking hegemony over this world: stupidity... Now and for the rest of his life, he knew that there were some people - indeed, many people - who did not realize what suspicion and hatred were doing to their own minds and to their victims.

Eventually Andre's prediction about a way for carrying out resistance did actually open up. One winter's day Magda heard a knock on her door and answered to find a snowcovered Jewish woman refugee there. And of course, at the potential cost of her life, Magda took her in.

For the rest of the Occupation, Magda Trocme and all the other people of Le Chambon would know that turning somebody away from one's door is not simply a refusal to help; from the point of view of that refugee, your closed door is an instrument of harmdoing, and your closing it does harm... Magda's word to her first refugee, "Naturally, come in, and come in," were part of an ethical action. Ethics, especially the ethics of crisis, or life and death, deals with the lives and deaths of particular human beings.

The image that has stayed with me these last couple of years since reading this book is of that door - the door that Andre said will apprear when you make the firm choice to resist evil. I only hope that, like Magda, I will open that door... when life depends on it.
at December 22, 2007