Every human being has a biological drive for 4 things...air, water, food, and sex. We've pretty much accepted the first two as givens, but ever since Eve took that bite out of an apple, we've struggled with our need for food and sex, coming up with all kinds of rules about who, what, when and how. I, for one, think its highly symbolic that such a powerful myth in our culture involves a woman eating a "forbidden fruit." After all, we know the long fixation we've had with who and when a woman has sex. Is it any surprise that we are also fixated on what she eats? 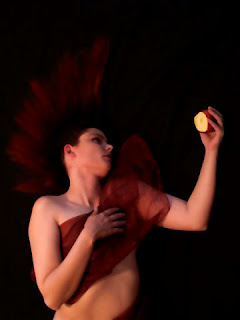 But just as with sex, these rules about eating get all tangled up in our psyches and come out a mish-mash of myths that are difficult to sort. And while we on the left have at least a bit more awareness about how seeing sex as a forbidden fruit is damaging, we seem to have bought in lock, stock, and barrel to the myths about eating. Of course, we've been aided in that process by alot of pseudo-science funded primarily by the $40 billion diet industry.

So what are these myths? The Center for Consumer Freedom has compiled a list of myths about obesity.

1. Obesity Kills 400,000 Americans a year
2. You Can't Be Overweight and Healthy
3. Obesity Is a Disease
4. Overeating Is the Primary Cause of Obesity
5. Soda Causes Childhood Obesity
6. 64 Percent of Americans Are Overweight or Obese
7. Obesity Costs the US Economy $117 Billion Annually

The Center has also published a 28 page report debunking each myth and you can find the pdf file on the report here. But I'd like to take up the one that is most embedded in our culture, the one that says "overeating is the primary cause of obesity." This one seems intuitive and has lodged itself so deep in our psyches that, even with evidence to the contrary, it's hard to uproot.

One of the people working on debunking these myths is Gina Kolata, science writer for the NYT and author of Rethinking Thin. In an article that is an excerpt from her book titled Genes Take Charge, and Diets Fall By the Wayside, she cites the work of Dr. Albert Stunkard of the University of Pennsylvania, who studied both adoptees and twins separated at birth. His conclusion:

The researchers concluded that 70 percent of the variation in peoples’ weights may be accounted for by inheritance, a figure that means that weight is more strongly inherited than nearly any other condition, including mental illness, breast cancer or heart disease.

Another person who writes regularly to debunk these myths is Susan Szwarc. In an article titled On Obesity, What the Researchers Didn't Find she concludes:

The GUTS (Growing Up Today Study) and DONALD (Dortmund Nutritional Anthropometric Longitudinally Designed Study) join a profusion of other studies, both clinical and epidemiological, over the past fifty years demonstrating that fat children and adults as a population normally eat exactly the same as thin people. And regardless of their diets, children will still naturally grow up to be a wide range of heights and body weights. "Multiple researchers, using a variety of methodologies, have failed to find any meaningful or replicable differences in the caloric intake or eating patterns of the obese compared to the non-obese to explain obesity," concluded David Garner, Ph.D. and Susan Wooley, Ph.D., for example, in their review of some 500 studies on weight in Clinical Psychology Review.

I imagine that most folks at this point would say that since obesity is a health problem, it doesn't matter what the cause is, the cure is eating less and loosing weight. While I'll leave the mixed reviews on the health risks for another day, the research is also quite clear that dieting is not only ineffective, it is a much bigger health risk than being overweight.

Kolata addresses the ineffectiveness of dieting in the article cited above by outlining research that demonstrates how genetics dictates weight...when you eat more, metabolism increases to limit weight gain and when you eat less, it slows. But the more serious health implications were actually found way back in the 1940's when Ancel Benjamin Keys, PhD. studied starvation.

Young male volunteers, all carefully selected for being especially psychologically and socially well-adjusted, good-humored, motivated, active and healthy, were put on diets meant to mimic what starving Europeans were enduring, of about 1,600 calorie/day -- but which included lots of fresh vegetables, complex carbohydrates and lean meats.

The "starvation" portion of the study lasted six months and they followed the subjects for a year afterwards. His findings were astounding - both physically and psychologically. In terms of the physical, as the men lost weight, they found that their physical endurance dropped by half, their strength by about 10%, their metabolic rates declined by 40% and their heart volume shrank by about 20%. Their sexual function and testes size were reduced and they lost all interest in sex. They had every physical indication of accelerated aging.

But the psychological effects were even more dramatic:

The men became nervous, anxious, apathetic, withdrawn, impatient, self-critical with distorted body images and even feeling overweight, moody, emotional and depressed...­They lost their ambition and feelings of adequacy, and their cultural and academic interests narrowed. They neglected their appearance, became loners and their social and family relationships suffered. They lost their senses of humor, love and compassion. Instead, they became obsessed with food, thinking, talking and reading about it constantly; developed weird eating rituals; began hoarding things...Binge eating episodes also became a problem as some of the men were unable to continue to restrict their eating.

In the year-long follow-up, here's what they observed:

When the men were allowed to eat ad libitum again, they had insatiable appetites and ate voraciously, some eating 8,000 to 10,000 calories a day, yet never felt full...On average, the men regained to their original weights plus 10%. But the weight regain was largely as fat and their lean body mass recovered much more slowly. Their weights then plateaued despite being given unlimited food, before finally, about 9 months later, most were near their initial weights -- giving scientists one of the first demonstrations that each body has a natural set point.

Dr. Keyes called the symptoms he observed "semistarvation neurosis." And when I read about this study, it had a huge and profound impact on me. I recognized that from the time I was 15 until I was in my 40's, I had lived this. Almost all of the symptoms were there as I bounced from one diet to the next, always gaining back the weight..and more. Not only living with these symptoms, but being told over and over again that if I just had enough will power, I could curb my eating and loose weight. It was my moral failure that kept me from being successful.

I lost 25 years of my life to this. And I'll never know how it might have been different if I hadn't had to battle back from all the depression, pain and shame. It took some grieving to get over that. But at least I'm grateful that I had the opportunity. And I'll be damned if anyone will ever sell me on the idea of forbidden fruit again! Instead, I'll follow the path that Mary Oliver spoke of in this excerpt from her poem "Wild Geese."

A little over a year ago, Ta-Nehisi Coates surprised himself (and everyone else) when he told Ezra Klein that he had become uncharacteristi...