My thoughts are pretty random this Sunday morning. But if I reach for a theme, I think I can find one in the idea that so much in our world is out of balance.

My theme might not be apparent at first in this story. But I was struck by Bill Moyers' closing remarks on his show this week.

If this was anyone but Moyers, I'd be thinking it was someone who looks at the world through the eyes of American exceptionalism. But we all know that's not his take. Perhaps what we are seeing is a world out of balance when it comes to power...people all over the world who's fate is tied to what happens in the US. Of course ours is tied to theirs as well. Its just that too many in this country are unaware of that...hence the lack of balance.

Jackson Browne reminds us that there are lives in the balance.

And next, on this long holiday weekend as we hear stories of people getting trampled to death by shoppers on "Black Friday," I can't help but think of Annie Leonard's wonderful videos on The Story of Stuff. If you haven't watched these already, I can't think of a more productive way to spend an afternoon or evening. They'll change you. I know they did me. Here's the chapter on consumption.

And finally, this week Nezua wrote about the 1982 film Koyaanisqatsi: Life Out of Balance. Here's what the director, Godfrey Reggio, said about it.

The greatest event in the history of mankind has occurred recently, and has been largely missed by both the media and academia. Beyond the headlines and every day crises of international events, a deeper shift in human affairs has occurred: Humanity no longer exists in the natural world, we are no longer connected to it. It is not that we are now users of technology, but rather that we exist within technology, we are part of it and it is part of us. The natural world now exists only to support the artificial one in which we live.

I had never seen the film, so last night I watched it. You can see the whole thing here (one hour, 25 minutes). But for a taste or a reminder, here's the trailer.

I certainly don't have the answers on how to right all that's out of balance in this world. Perhaps the first step is noticing and righting ourselves as much as we can. Toward that end, I can't think of anyone who helps balance my inner soul more than Mary Oliver. So I'll leave you with "The Sun."

Have you ever seen
anything
in your life
more wonderful

than the way the sun,
every evening,
relaxed and easy,
floats toward the horizon

and into the clouds or the hills,
or the rumpled sea,
and is gone--
and how it slides again

out of the blackness,
every morning,
on the other side of the world,
like a red flower

streaming upward on its heavenly oils,
say, on a morning in early summer,
at its perfect imperial distance--
and have you ever felt for anything
such wild love--
do you think there is anywhere, in any language,
a word billowing enough
for the pleasure

that fills you,
as the sun
reaches out,
as it warms you

as you stand there,
empty-handed--
or have you too
turned from this world--

or have you too
gone crazy
for power,
for things? 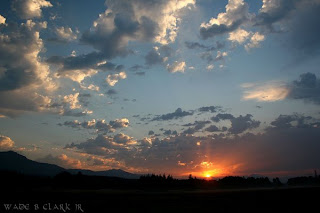