The hard part about winter for me is not necessarily the cold...its the darkness. I don't know what its like where you are, but around these parts I figure we spend about 1/3 of any 24 hour period in the light and the rest of the time darkness rules. So its the dark that's on my mind today.

Of course, there's nothing wrong with darkness. Its a great excuse for the lazy among us to hibernate. And it seems that there are some who prefer the dark for prowling. But overall, we seem to want to avoid it. 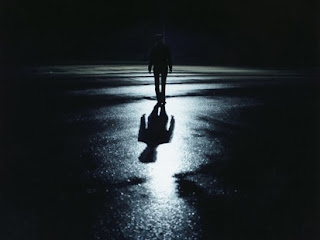 On the other hand, we all know that a certain kind of darkness we've been living with is about to end. I find a mixture of disgust and curiosity as I watch George W. reflect on his tenure in office while trying to avoid the dark. As you know, he's in the process of giving interviews these days, perhaps thinking that he can shed some light on his "legacy."

It has been clear for a long time now that W. has no capacity to reflect on himself and his actions. That's why he will always lack the ability to grow and learn. And while none of us are as incapacitated as he is, its hard for us too. Looking at the darkness that resides within us is perhaps one of the most difficult things we are asked to do.

I am reminded of a scene in Arthur Miller's play After the Fall. The main character Quentin (who is Jewish) is asking a German woman how she lives with herself after the Holocaust. Here's what she says.

I think it's a mistake to ever look for hope outside of one's self. One day the house smells of fresh bread, the next of smoke and blood. One day you faint because the gardener cuts his finger off, within a week you're climbing over corpses of children bombed in a subway. What hope can there be if that is so?

I tried to die near the end of the war. The same dream returned each night until I dared not go to sleep and grew quite ill. I dreamed I had a child, and even in the dream I saw it was my life, and it was an idiot, and I ran away. But it always crept onto my lap again, clutched at my clothes. Until I thought, if I could kiss it, whatever in it was my own, perhaps I could sleep. And I bent to its broken face, and it was horrible...but I kissed it. I think one must finally take one's life in one's arms.

Whenever I shrink at the thought of looking at my own darkness, I try to think of this baby clutching my clothes and imagine taking her up in my arms. Too often though, I get defensive and don't take the time to realize that if I could honestly look at myself and embrace what I see - warts and all - I'd perhaps have the strength to find the only real hope that is available to me when it looks like the world is falling apart...myself.

When I have been able to face my own darkness, I find fear, guilt, shame, anger...its tough. But more often than not, the experience leaves me with what David Whyte has called "Sweet Darkness."

When your eyes are tired
the world is tired also.

When your vision has gone
no part of the world can find you.

Time to go into the dark
where the night has eyes
to recognize its own.

There you can be sure
you are not beyond love.

The dark will be your womb
tonight.

The night will give you a horizon
further than you can see.

You must learn one thing:
the world was made to be free in.

Give up all the other worlds
except the one to which you belong.

anything or anyone
that does not bring you alive

is too small for you.