Frum levels the most devastating Romney critique of all

The title of David Frum's post today says it all: Romney: Too Weak?


It's not just his arguments that are weak. For the past year, we have watched him be pushed around by the radical GOP fringe...

...at every point, Romney has surrendered to the fringe of his party. Weak. And now in his first tough encounter with Barack Obama, Romney is being shoved around again. This is not what a president looks like - anyway, not a successful president.

While many of us have admired Frum's sanity lately, its important to remember that he is a Republican. And perhaps more importantly, he's been a strong supporter of Mitt Romney. So when he levels a charge like "weak" at his preferred candidate, people should take note.

Its also important to keep in mind that the Republicans have completely wedded themselves to manly white heterosexual men as their base. Being weak to these folks is nothing short of anathema.

I tend to think that BooMan is right...Romney doesn't have a choice. He's taking the only road he has available to someone with his past and platform. That means he either continues to take the path he's been on and look weak, or he blows up his whole campaign. Which one will it be Mitt? 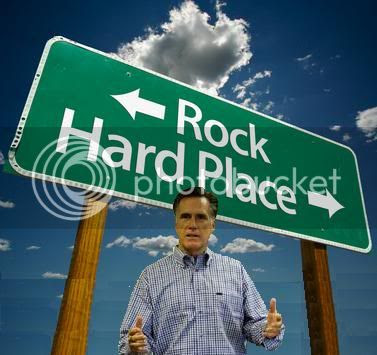