Why Allie and Stephanie matter 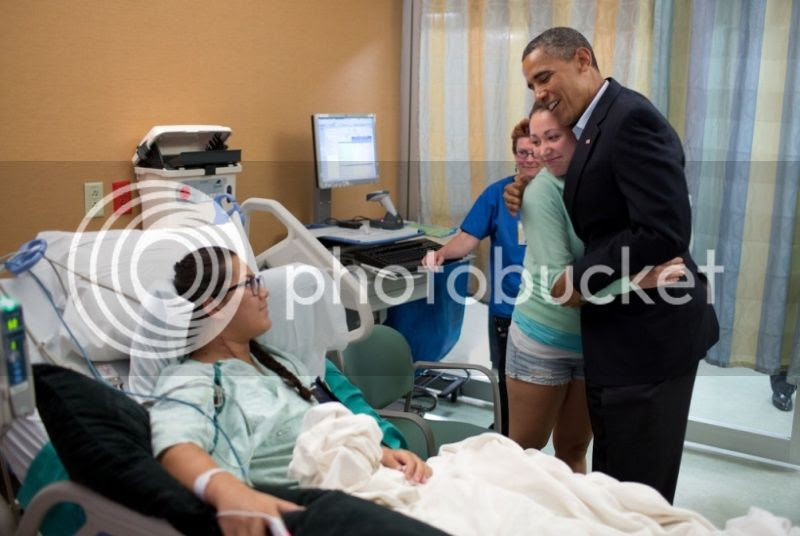 After visiting with Allie and Stephanie yesterday, President Obama told their story.


When the gunman initially came in and threw the canisters, he threw them only a few feet away from Allie and Stephanie, who were sitting there watching the film. Allie stood up, seeing that she might need to do something or at least warn the other people who were there. And she was immediately shot. And she was shot in the neck, and it punctured a vein, and immediately she started spurting blood.

And apparently, as she dropped down on the floor, Stephanie -- 21 years old -- had the presence of mind to drop down on the ground with her, pull her out of the aisle, place her fingers over where she -- where Allie had been wounded, and applied pressure the entire time while the gunman was still shooting. Allie told Stephanie she needed to run. Stephanie refused to go -- instead, actually, with her other hand, called 911 on her cell phone.

Once the SWAT team came in, they were still trying to clear the theater. Stephanie then, with the help of several others, carries Allie across two parking lots to where the ambulance is waiting. And because of Stephanie's timely actions, I just had a conversation with Allie downstairs, and she is going to be fine.

He's done that before at times like this. At the memorial following the shootings in Arizona, he told us the stories of heroism that happened that day. And then he said this:

In the midst of events like what happened in Tucson and Aurora, the shooters remind us of the worst that we - as human beings - are capable of. That amplifies all of our angers and fears.

But Stephanie and Allie (as well as all the other heroes of a day like that) remind us that we are also capable of tremendous strength and courage and compassion.

The thing that separate those two sides of human nature are the choices we make...every day.
at July 23, 2012