Standing strong as the dying beast lashes out 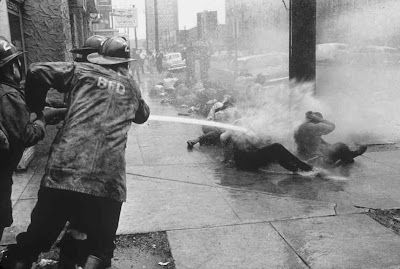 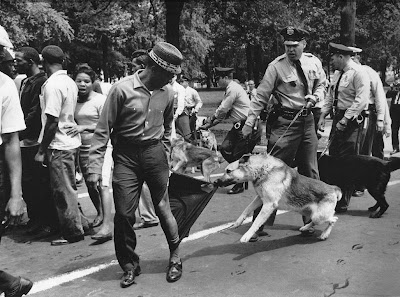 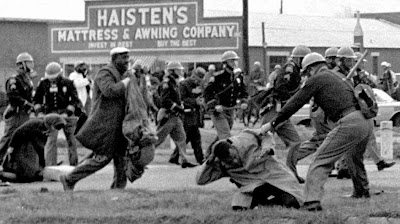 Those pictures are a painful reminder of the reaction we all witnessed as the dying beast of Jim Crow lashed out at those who were fighting for its demise.

While the stakes were higher and the reaction more physical, I was reminded of that point in the Civil Rights movement when I read this outstanding article by Susan Milligan.

The theme has been percolating for some time. The practice on the Hill to deny the president even the most non-controversial things – such as nominations for U.S. Marshalls – shows that there is more going on here than an effort to stop some wildly liberal agenda.

Republicans repeatedly use the word "fail" in their characterization of this president and this administration, hoping, perhaps, that is will become inexorably linked with the word "Obama" in history. This was petty, but somewhat understandable, when the GOP had a political goal in mind – the defeat of Obama for a second term. But now that he's back, what is the point? And why?

Most of us would like to believe it has nothing to do with race, that Obama's election by definition means that the country has evolved past that sort of visceral bigotry. And yet it is impossible not to consider race as a factor.

It's not that Congress, or even the country, is full of a bunch of rabid bigots who hurl racist epithets or walk around in white sheets on their days off. It's more subtle than that. There are people, on and off the Hill, who clearly still have a hard time seeing Barack Obama as president. They talk about Obama not being a "grown up" – coming dangerously close to referring to the first half-African-American president as "boy" – and show none of the deference historically afforded to the person holding the office...

Do Republicans in and out of Congress really hate Obama? Or do they just hate what he represents, a country that is undergoing dramatic demographic and social change? Vying to make Obama fail may succeed in tainting the legacy of the first mixed-race president. But it doesn't stop the changing face of America. Latinos, other minorities and women are becoming more powerful, both in numbers and in political representation. Gay marriage is becoming more acceptable. That may be world-shaking for social conservatives. But making Obama fail won't halt the trend.

Just as the dying beast lashed out violently to the challenge to Jim Crow, its lashing out now at the demise of white male heterosexual privilege.

I suspect that when the fire hoses, dogs and beatings were unleashed in that earlier era, there were some who questioned the wisdom of their leaders as the violence took hold and the victories had not yet been realized.

But for the most part, they stood strong and prevailed. Those are likely the same folks who are telling us to chill out with the hair-on-fire doomsaying today. They know what a beast looks like in its death throes...its ugly. But they have the staying power to see it through.