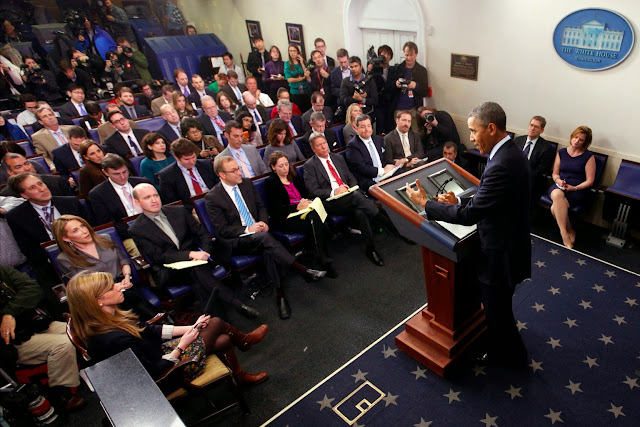 When you look at a picture like this, what stands out to you? If, by chance, you noticed how overwhelmingly "white" the White House Press Corp is, then give yourself a gold star. The closer the people in the photo are to the front row, the more you're seeing the group of folks who have made it to the top ranks of the profession of journalism...and the less likely you are to see a person of color.

Given the fact that in just a few years time, white people will lose their majority status in this country, you'd think that this would be changing. Well, according to Politico, you'd be wrong. They recently published a list of the 10 journalists to watch in 2014 and there's not a person of color to be found apparently. David Dennis noticed. And he came up with a pretty good reason for why this continues to happen.

A few months ago, I wrote a commentary for the Guardian about how unpaid internships create an unfair funnel system to media outlets. They create a homogenous voice that excludes those who don't have the money or privilege to work for free. This, to me, is the biggest challenge facing the media.

If being able to work for free is a requirement to getting your foot in the door at most media outlets, that would do a pretty good job of excluding a variety of points of view - including those of people of color.

Obviously Dennis has talked to various publications about this deficiency and he hears the same old line one often hears when white employers seem to have good intentions about diversifying their work force, but fail..."we just can't find qualified applicants." Dennis has a great response:


...the internet is full of thousands of people writing about issues from diverse perspectives every day. There are blogs, websites and even Twitter feeds full of brilliant, poignant and diverse writing pushing envelopes and driving conversations. These writers just need bigger platforms to affect change and shed light on issues.

There is no excuse if people are really interested. The talent is out there. But bringing it in would mean change - and there's the rub. Whether its media or some other business, the truth is that changing the demographics of your work force beyond tokenism is going to change your business. When it comes to journalism, that is likely going to mean a change in the kinds of stories that are covered and the kinds of perspectives that are included. By not being willing to go there, much of our current media will maintain the lens that distorts their racial, cultural and patriarchal view of the world.
at December 30, 2013

Email ThisBlogThis!Share to TwitterShare to FacebookShare to Pinterest
Labels: Media