Inequality is first and foremost a moral question

Over and over again, President Obama has said that income inequality is the defining issue of our time. Lately we've seen that issue being engaged...whether it was OWS screaming at Wall Street or Mitt Romney dismissing the 47% of "takers." As the battle over policies to improve or worsen the situation is engaged, I think its important to ground ourselves in the moral arguments that are being made.

Recently, Timothy Egan did a good job of summarizing some of the things Republicans have said about that. The message is that the poor are morally inferior.


“The explosion of food stamps in this country is not just a fiscal issue for me,” said Representative Steve Southerland, Republican from Florida, chief crusader for cutting assistance to the poor. “This is a defining moral issue of our time.”

It would be a “disservice” to further extend unemployment assistance to those who’ve been out of work for some time, said Senator Rand Paul, Republican of Kentucky. It encourages them to sit at home and do nothing.

“People who are perfectly capable of working are buying things like beer,” said Senator James Inhofe, Republican of Oklahoma, on those getting food assistance in his state.

That reminded me of something Rick Santorum said while he was running for president. His position was basically that the suffering of poor people was good for them.


During a town hall meeting in Ottumwa, Iowa Friday afternoon, Rick Santorum argued that Americans receive too many government benefits and ought to “suffer” in the Christian tradition. If “you’re lower income, you can qualify for Medicaid, you can qualify for food stamps, you can qualify for housing assistance,” Santorum complained, before adding, “suffering is part of life and it’s not a bad thing, it is an essential thing in life.”

What's been interesting lately is to see some conservatives not only talk about the moral failings of the poor, but to actually engage in this discussion by attempting to extoll the moral superiority of the wealthy. Joseph Epstein made just such an argument recently in the Wall Street Journal. Speaking wistfully of the days that the WASP elite ran this country, he says:


Yet the WASP elite had dignity and an impressive sense of social responsibility. In a 1990 book called "The Way of the Wasp," Richard Brookhiser held that the chief WASP qualities were "success depending on industry; use giving industry its task; civic-mindedness placing obligations on success, and antisensuality setting limits to the enjoyment of it; conscience watching over everything."

Under WASP hegemony, corruption, scandal and incompetence in high places weren't, as now, regular features of public life. Under WASP rule, stability, solidity, gravity and a certain weight and aura of seriousness suffused public life. As a ruling class, today's new meritocracy has failed to provide the positive qualities that older generations of WASPs provided.

Oh my!!! Some people were so stunned by this outrageous argument that they questioned whether Epstein was writing ironically. I guess not. Frankly, the whole idea of taking it upon oneself to decide whether the rich or poor are morally superior is stunning to me.

On the other side of the coin, Pope Francis is shaking up the whole world these days with a very different kind of argument.


How can it be that it is not a news item when an elderly homeless person dies of exposure, but it is news when the stock market loses two points? This is a case of exclusion. Can we continue to stand by when food is thrown away while people are starving? This is a case of inequality. Today everything comes under the laws of competition and the survival of the fittest, where the powerful feed upon the powerless. As a consequence, masses of people find themselves excluded and marginalized: without work, without possibilities, without any means of escape...

In this context, some people continue to defend trickle-down theories which assume that economic growth, encouraged by a free market, will inevitably succeed in bringing about greater justice and inclusiveness in the world. This opinion, which has never been confirmed by the facts, expresses a crude and naïve trust in the goodness of those wielding economic power and in the sacralized workings of the prevailing economic system. Meanwhile, the excluded are still waiting. To sustain a lifestyle which excludes others, or to sustain enthusiasm for that selfish ideal, a globalization of indifference has developed. Almost without being aware of it, we end up being incapable of feeling compassion at the outcry of the poor, weeping for other people’s pain, and feeling a need to help them, as though all this were someone else’s responsibility and not our own.

Wow! All of the sudden we're not talking about someone else's morality (the rich or the poor), but our own. Now its getting personal. That's exactly how President Obama posed the issue to the graduating class of Northwestern University back in 2006:


...we live in a culture that discourages empathy. A culture that too often tells us our principle goal in life is to be rich, thin, young, famous, safe, and entertained. A culture where those in power too often encourage these selfish impulses.

They will tell you that the Americans who sleep in the streets and beg for food got there because they're all lazy or weak of spirit. That the inner-city children who are trapped in dilapidated schools can't learn and won't learn and so we should just give up on them entirely. That the innocent people being slaughtered and expelled from their homes half a world away are somebody else's problem to take care of.

It's because you have an obligation to yourself. Because our individual salvation depends on collective salvation. And because it's only when you hitch your wagon to something larger than yourself that you will realize your true potential - and become full-grown.

While I applaud those who find their religion to be helpful in exercising this kind of "collective salvation," I'm thankful for humanity's sake that it is not a requirement. 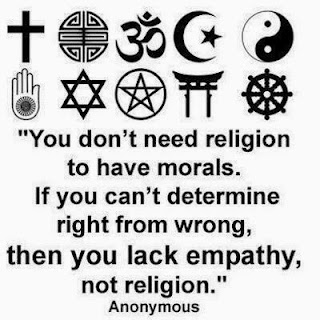