Will 2014 be the year we finally end perpetual war?

This year one of the most important articles I wrote was about the reduction in the number of drone strikes. But that was way back in February. On May 23rd President Obama gave a speech about our counterterrorism efforts and focused specifically on our policy about the use of drones.

In the Afghan war theater, we must -- and will -- continue to support our troops until the transition is complete at the end of 2014. And that means we will continue to take strikes against high value al Qaeda targets, but also against forces that are massing to support attacks on coalition forces. But by the end of 2014, we will no longer have the same need for force protection, and the progress we’ve made against core al Qaeda will reduce the need for unmanned strikes.

Beyond the Afghan theater, we only target al Qaeda and its associated forces. And even then, the use of drones is heavily constrained. America does not take strikes when we have the ability to capture individual terrorists; our preference is always to detain, interrogate, and prosecute. America cannot take strikes wherever we choose; our actions are bound by consultations with partners, and respect for state sovereignty.

America does not take strikes to punish individuals; we act against terrorists who pose a continuing and imminent threat to the American people, and when there are no other governments capable of effectively addressing the threat. And before any strike is taken, there must be near-certainty that no civilians will be killed or injured -- the highest standard we can set.

He didn't promise to immediately end the use of drones, but provided us with the circumstances under which they would be used. And so, with 2013 coming to an end, I thought it would be interesting to take a look at how this year compares to what has happened in the past. 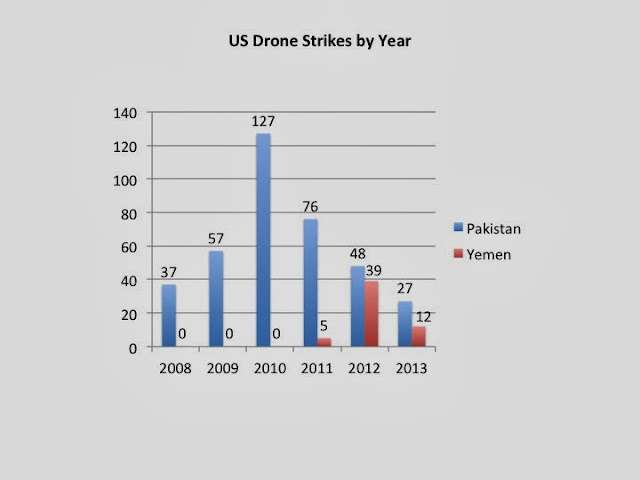 A headline in Pakistan Today reflects what you see for that country in these numbers: Drone strikes lessen to all time low since 2008. It is also important to note that over half (7) of the drone strikes in Yemen came in July/August this year during the time that intelligence reports of threats prompted the US to shut down embassies all over the Middle East.

The Bureau of Investigative Journalism, which has been quite critical of President Obama on the use of drones, had this to say about the result of his efforts to curtail civilian casualties.

I realize that we've all moved on from fear-mongering about drones to worrying about the NSA. But the truth is that President Obama is keeping his promise to bring an end to perpetual war. And as we look forward to the day our troops come home from Afghanistan in 2014, its pretty clear that he meant what he said back in May 2012.


My fellow Americans, we have traveled through more than a decade under the dark cloud of war. Yet here, in the pre-dawn darkness of Afghanistan, we can see the light of a new day on the horizon. The Iraq War is over. The number of our troops in harm’s way has been cut in half, and more will be coming home soon. We have a clear path to fulfill our mission in Afghanistan, while delivering justice to al Qaeda...

This time of war began in Afghanistan, and this is where it will end.