Who was the actual "Deporter-in-Chief?"

People have been throwing lots of numbers around to compare the records of Presidents Bush and Obama when it comes to deporting undocumented workers. Nora Caplan-Bricker has done the best job I've seen of helping to clear up the confusion.  It can be summed up with this chart. 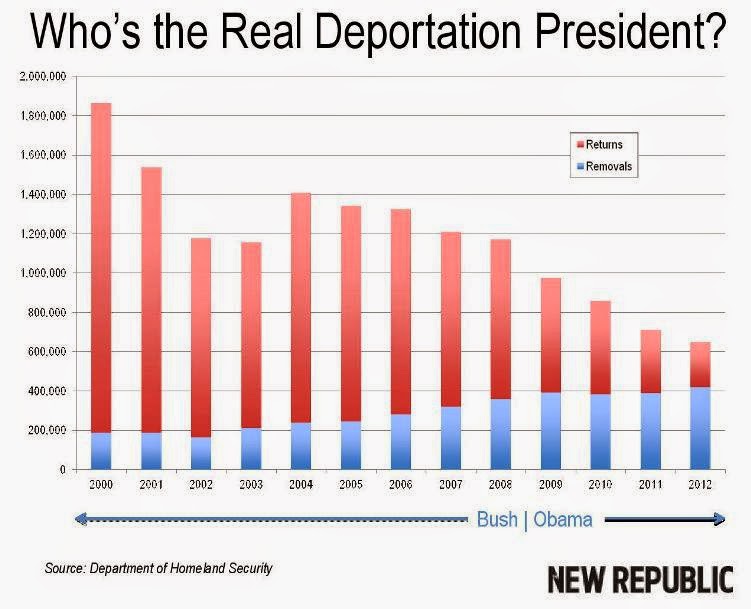 The blue part of the graph (removals) represents those who have been deported as a result of a court appearance and the red part (returns) are those who were simply returned to their home country without a court hearing (what the Bush administration so disrespectfully called "catch and release"). What you can see is that the number of "removals" has gone up - but the number of "returns" has gone down dramatically.

What strikes me immediately is the question: which is more in keeping with our legal standards - to simply send someone back without access to a judicial hearing, or to allow them their day in court? Its not surprising that our President's history with constitutional law would mean an emphasis on the latter.

But its true that there have been some consequences to that change. As many have pointed out - those who go through the court system have a criminal record as a result. With the administration's emphasis on deporting those with such records, some undocumented workers are being deported with that as their sole offense. It reminds me what Professor Obama's law students said was his emphasis when teaching:


But as a professor, students say, Mr. Obama was in the business of complication, showing that even the best-reasoned rules have unintended consequences, that competing legal interests cannot always be resolved, that a rule that promotes justice in one case can be unfair in the next.

The best way to clear this up of course, would be to pass comprehensive immigration reform containing a pathway to citizenship for undocumented workers. That's what President Obama and the Democrats in Congress have been working on. Any attempt to solve this via executive order would have meant the sure death of that solution.

But Republicans have engaged in their usually obstruction. And so they have been given an ultimatum: either pass comprehensive immigration reform by this summer, or President Obama will do what needs to be done on his own. That's where things stand at this moment.

All of this reminds me of another way President Obama's record on deportations varies greatly with that of his predecessor. Back in 2008, those of us who were paying attention were appalled at what the Bush administration did in Postville, Iowa. If you want to remind yourselves of how completely they subverted our constitutional principles, go meander around that link for awhile. Or listen to a real whistleblower recount what he saw that day.

The 400 workers who were rounded up at that plant were charged - not simply with being undocumented - but with social security fraud and aggravated identity theft. With limited access to legal counsel in rushed on-the-spot proceedings, many of them didn't understand what was happening to them.

Of course there were other instances of the same kind of thing. A few months later there was a raid on a factory in Laurel, Mississippi. Particularly appalling was that the 600 workers who were rounded up in that one were sorted by race in order to determine who to investigate and who to release.

I'll join with anyone who is working towards improving the situation of the 11 million undocumented workers who live in the shadows in this country. But given the history, I'll be DAMNED if I'll stay quiet when anyone suggests that President Obama has a worse record on this than GWB!!!!
at April 18, 2014