President Obama plays tortoise to the media's hare. And we know who wins that one! 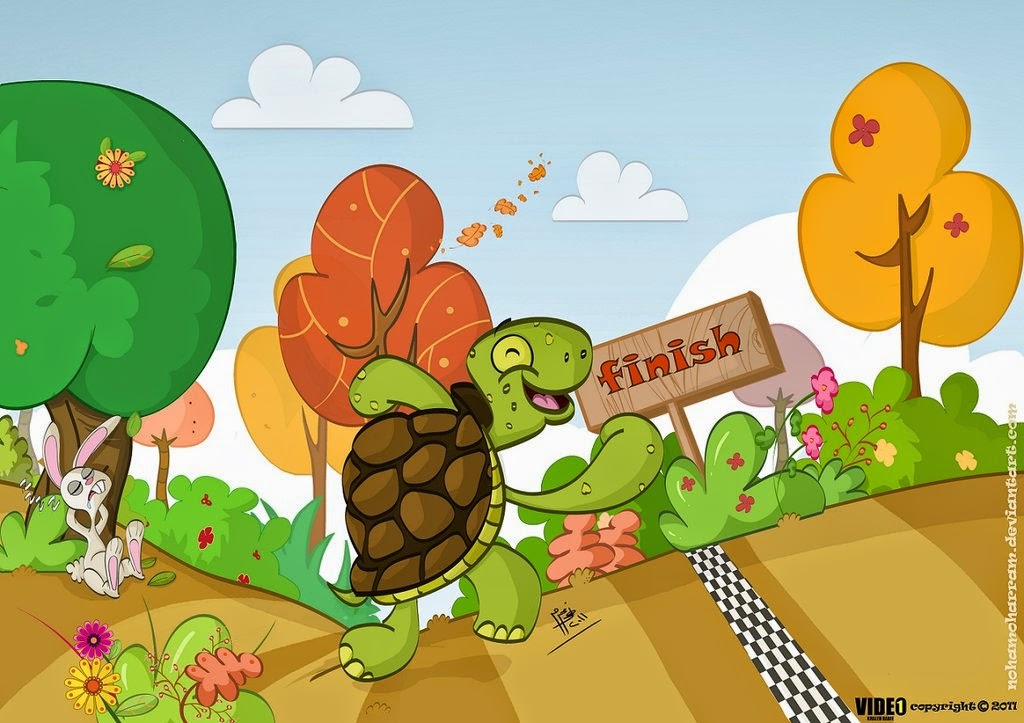 I've often thought that the best metaphor for the Obama presidency is the fable about the tortoise and the hare. Of course - in the role of the hare is our linkbait-obsessed media that runs from one form of hysteria to another in a constant quest for "Obama's Katrina," only to tire almost immediately before the story's conclusion. The role of the tortoise is played by our President, who is always focused on the long game ("slow and steady wins the race"). As FLOTUS once said:

As we approach the finish line, we can begin to see who is going to reach the tape first. Here are some recent "long game" headlines:


All told, over the last 12 months, the U.S. economy has added over 2.49 million jobs overall and 2.43 million in the private sector. What’s more, June was the 52nd consecutive month in which we’ve seen private-sector job growth – the longest on record.

At this point, with the year about half over, 2014 is currently on track to be the best year for U.S. job creation since 1999. 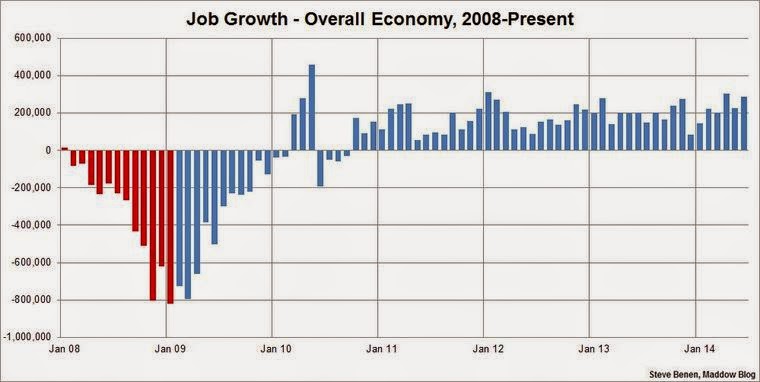 ...it’s worth noting that the unemployment rate has now dropped to 6.1%, its lowest point since September 2008, nearly six years ago. The rate has dropped more than a full point since last fall, and is down nearly four full points since its Great Recession high of 10%. 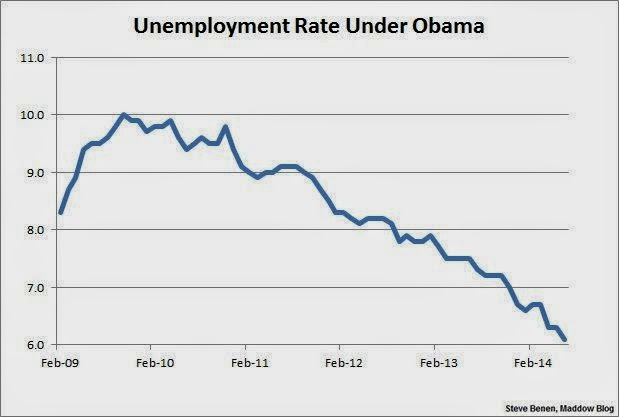 The number of people who applied for unemployment benefits in the first week of July fell by 11,000 to 304,000, putting initial claims close to a seven-year bottom again and offering more evidence that U.S. hiring has accelerated while the rate of layoffs remains low. 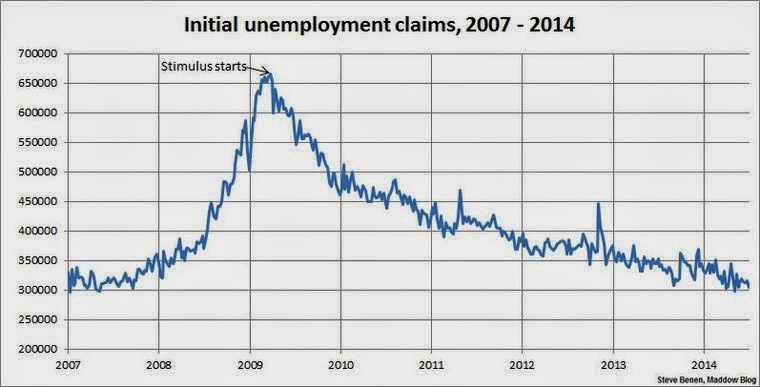 It seems that even GOP consumers are happy with Obamacare.

The survey, from the Commonwealth Fund, a research group, came to similar conclusions as other surveys about the expansion of health insurance. It found that about 15 percent of adults younger than 65 now lack health insurance, down from 20 percent before the Affordable Care Act rolled out in January.

What was more surprising is that people who got the new coverage were generally happy with the product. Overall, 73 percent of people who bought health plans and 87 percent of those who signed up for Medicaid said they were somewhat or very satisfied with their new health insurance. Seventy-four percent of newly insured Republicans liked their plans. Even 77 percent of people who had insurance before – including members of the much-publicized group whose plans got canceled last year – were happy with their new coverage.


What this chart shows is how much the Congressional Budget Office expects we'll need to pay for each and every Medicare beneficiary. And over the past four years, the forecasting agency has consistently downgraded the price of covering one senior's health care costs.

Saving $1,000 per patient adds up quickly in a program that covers about 50 million people. More precisely, it adds up to about $50 billion in savings this year. The reduction in expected costs grows to $2,369 in 2019. With an expected 60 million seniors enrolled in Medicare that year, it would work out to more than $120 billion shaved off the total cost of the program. 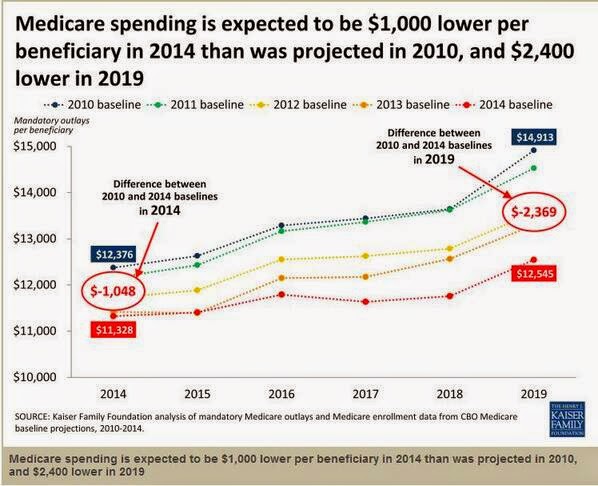 No fancy charts for this one. Just quotes from one of the few pundits who seems to understand the Obama Doctrine - Michael Cohen.

On June 23, the last of Syria’s chemical weapons stockpile was loaded onto a Danish freighter to be destroyed. The following day, President Vladimir V. Putin of Russia asked his Parliament to rescind the permission that it had given him to send troops into Ukraine. Meanwhile, there is still cautious optimism that a nuclear deal with Iran is within reach.

What do these have in common? They were achieved without a single American bomb being dropped and they relied on a combination of diplomacy, economic sanctions and the coercive threat of military force. As policy makers and pundits remain focused on Iraq and the perennial but distracting discussion about the use of force, these modest but significant achievements have, perhaps predictably, been ignored. Yet they hold important lessons for how American power can be most effectively deployed today...

All too often, though, our foreign policy debates are defined by simplistic ideas: that force is a problem-solver, that America can go its own way and that mere application of American leadership brings positive results. But the results with Syria, Russia and Iran remind us that when American foreign policy is led by painstaking diplomacy, seeks multilateral consensus and acts with an understanding of its own limitations, it can produce positive results. More often than not, boring is better.

Note: I encourage you to go read the whole column by Cohen. Its very rare that I agree totally with almost every sentence a pundit writes. This is one of those times.

I think Cohen summed all of this up quite well with that last line: "More often than not, boring is better." President Obama focuses on the long game towards pragmatic policies that work. That is anathema to the hysteria-obsessed hares. Is it any wonder that the Republican's only play is to try to feed that hysteria? But we all know who wins in the end, don't we?
at July 10, 2014