Are Americans in a permanent funk? 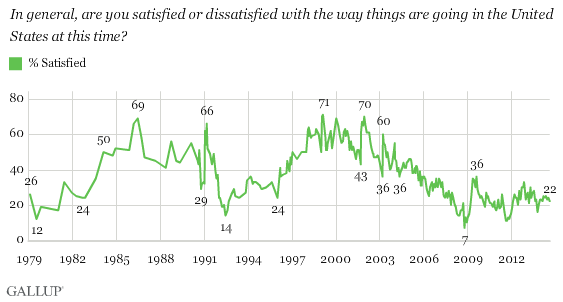 
The last time a majority of Americans were satisfied with the direction of the country was more than a decade ago, a 55% reading in January 2004. Further, satisfaction has not topped 40% since July 2005, amid a struggling economy, wars in Iraq and Afghanistan, and declining confidence in government.

I'll just add a caveat that I've written about before: it is people of color who are the optimists among us these days.  Even so, we might ask ourselves what has put so many of us in such a funk. I'm going to take a stab at outlining three things that are contributing to it.

Robert Fisk has written an interesting article about how ISIS is exploiting social media. Its just another example of how technology has made our world smaller. We now see and hear about events both around the world and here at home with an immediacy that is unprecedented. I've often thought that when it feels like the world is going to hell these days, the truth is that its always been that way...we just didn't know it. We face the choice of either ignoring what's going on or developing a serious case of compassion fatigue.

While its true that the world has always had a certain amount of chaos, most Americans who are alive today have had simple frames of good/evil with which to understand those events. During World War II the enemy was fascism and during the Cold War it was communism. In search of a way to frame what is going on now, some conservatives have tried to rally us around a new ideological frame of reference by seeing the enemy as Islam or terrorism. But much of that breaks down when we can't locate who the "good guys" are in tensions between Assad's Syria and ISIS - as just one example.

But the world is changing at home too. We just elected our first African American President...twice. And in about 20 years, white people will no longer be a majority in the country. In states like California and Texas - that has already happened. Folks can see the change coming. And the dying beast is lashing out - even as it knows its days are numbered.

In the past, most Americans got their news from the same sources. We knew what was going on in the world because Walter Cronkite told us.

Now people get their news from whatever source tends to reinforce their world view. People have been pointing this out for a while now. But I think its important to add that partisan reporting is based on an assumption that the "other side" is out to destroy the country. This happens on both the left and the right.

While you might think that one side of that equation is correct, its important to notice the corrosive effect this has on all of us. We are constantly being told that this is the fight of a lifetime and if our side doesn't win, it is the end of America as we know it. To make that point, we are barraged with news about all the horrible things the other side is doing/saying. As much as I love Media Matters, I have to take them in small doses or I get in a pretty ugly funk myself.

Some people are even suggesting that President Obama might be in a bit of a funk lately. That's amusing because before he went on vacation a couple of weeks ago, the news was all about how "the bear is loose." But if he does ever get discouraged (which I'm sure happens), I suspect that ISIS and Ferguson are not what lingers. It probably has more to do with our ongoing struggle to accomplish this:


Our goal should be to stick to our guns on those core values that make this country great, show a spirit of flexibility and sustained attention that can achieve those goals, and try to create the sort of serious, adult, consensus around our problems that can admit Democrats, Republicans and Independents of good will.

Continuing to work at that requires optimism (i.e., hope) that says its possible to achieve. That kind of optimism becomes contagious when we look at what we've accomplished so far - against some pretty big odds. When the bear gets loose again, I'm sure he'll go right back to where he was before he (sorta) went on vacation.

You don't have time to be cynical. Hope is a better choice.