On patriotism and dissent

Today I ran across a speech that candidate Barack Obama gave in June 2008 on the topic of patriotism. We'll just leave alone the irony of the fact that he gave that speech in Missouri. But one of the things he talked about is that patriotism is often defined by dissent to our government/leaders.


Of course, precisely because America isn't perfect, precisely because our ideals constantly demand more from us, patriotism can never be defined as loyalty to any particular leader or government or policy. As Mark Twain, that greatest of American satirists and proud son of Missouri, once wrote, "Patriotism is supporting your country all the time, and your government when it deserves it." We may hope that our leaders and our government stand up for our ideals, and there are many times in our history when that's occurred. But when our laws, our leaders or our government are out of alignment with our ideals, then the dissent of ordinary Americans may prove to be one of the truest expressions of patriotism.

We can look at that from a couple of different angles. First of all, President Obama has continually supported the right of protesters in Ferguson to assemble and speak their minds about the shooting of Michael Brown and the response of local government officials.

In addition, some people have chosen to speak out against President Obama's response to the events in Ferguson. I'd suggest that he would find their dissent patriotic. But for me the, question arises as to whether or not that kind of dissent is effective.

Not too long ago, the President told young people at his My Brother's Keeper town hall meeting what kinds of critiques he takes to heart. He mentioned three questions he poses:
We can apply those questions to the critiques we've heard lately. Some of them actually meet these criteria. But when it comes to patriotism, candidate Obama talked about something else he includes:


Beyond a loyalty to America's ideals, beyond a willingness to dissent on behalf of those ideals, I also believe that patriotism must, if it is to mean anything, involve the willingness to sacrifice - to give up something we value on behalf of a larger cause.

That reminded me of this moment last November. 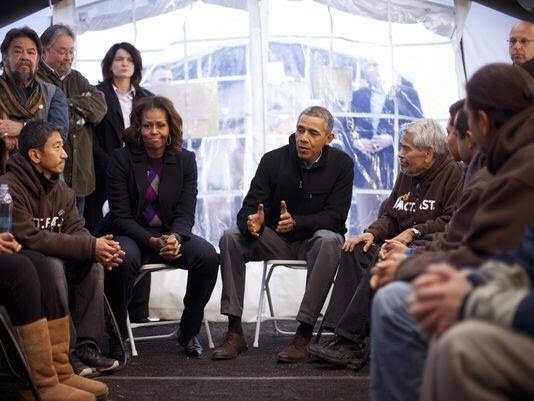 That is a picture of the President and First Lady visiting the people involved in Fast 4 Families. At the time this happened, I noted that it was likely the first time a sitting president showed that kind of support for an activist movement. They got the attention of our "Community Organizer-in-Chief" specifically because they were engaging in the very definition of patriotic dissent.

Finally, Al Giordano wrote something in response to the speech from Obama that I think is at the heart of the difference between effective and ineffective dissent.

My duty to the causes I care about is not to cry that we've been victimized, or that "the sky is falling," or to play armchair quarterback shouting from the bleachers at the captain on the field that he must make his next play a run or a pass. Nor is it to yell, "I'm taking my money and support and game board and going home." It is, rather, to inform and organize greater public opinion to grow to see the issue as I see it, so that whenever he may take office, he will have to deal with the reality that we have created with or without him.

People that care deeply and legitimately about misunderstood or unpopular issues like abolition of the death penalty for anyone (even for child rapists), or that Israel has to end its terrible treatment of Palestinians, or that there should be no immunity for telecommunications companies that spy on behalf of the government on Americans that communicate abroad, or fill-in-your-pet-issue-here, have to first educate and organize the citizenry to demonstrably agree with them before they can realistically insist that any political candidate stick his neck onto their pet chopping block.

I've commented before that the great civil rights leaders of our past didn't spend their time calling out politicians for their failures. On everything from bus boycotts to lunch counter sit-ins to breakfasts for pre-schoolers, they spent their time organizing the community...until the politicians had to listen.

Those who think that dissent is all about critiquing what President Obama does/doesn't do forget something every community organizer knows in their bones...