OK...so this one from Rich Lowry broke my irony meter this morning.


In a fit of postelection modesty, President Barack Obama is offering not to take executive action to amnesty millions of illegal immigrants — provided Republicans do his bidding on immigration.

It is extortion as conciliation. New Jersey governor Chris Christie often invites comparisons to The Sopranos, but it is President Obama who is making a tactic taken out of the HBO mob drama his major postelection initiative. His bipartisan outreach now ends with a pointed “Or else . . . ”

This offer Republicans can’t refuse includes the stipulation that the president will revoke his executive action in the event they pass legislation to his liking. How generous of him.

As an aside, if you had trouble reading that first sentence like I did, its because conservatives have fallen so in love with the word "amnesty" that they've started using it as a verb as well as a noun.

But my bigger point is to notice that all of the sudden someone like Lowry thinks extortion in politics is a bad thing. This comes from the side of the isle that threatened to blow up the entire global economy by failing to raise the debt ceiling if President Obama didn't cave to their demands on the budget. Anyone else remember those days? Been there...collected the cartoons :-) 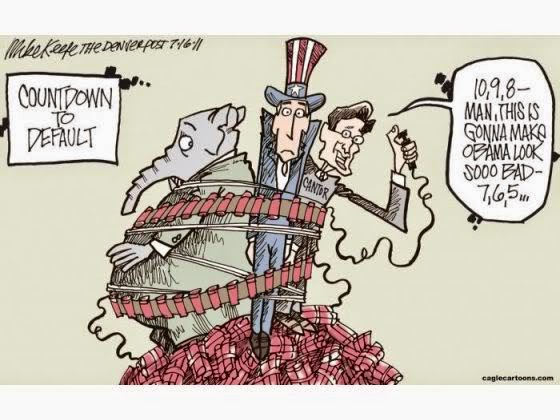 Of course, its important to point out that President Obama isn't threatening to blow up anything. He's been saying for months now that if the House fails to pass the bipartisan immigration reform bill from the Senate, he would move on his own to protect families who have lived here for years from being separated due to draconian deportation policies. In other words, nothing gets blown up but the obstructionist's egos.

So I invite you to have a few laughs at Rich Lowry's expense this morning. I sure did.
Posted by Nancy LeTourneau