Valerie Jarrett has Obama's back. So of course she's a target. 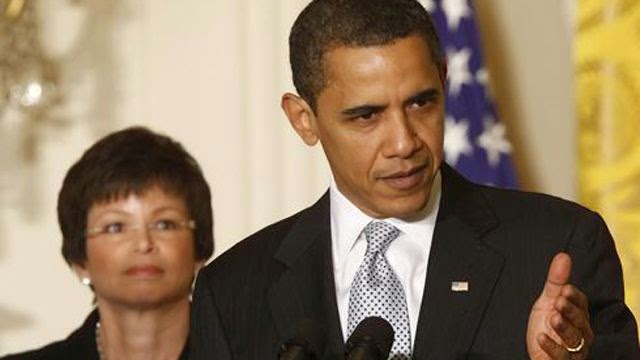 My tin foil hat wants to know why all of the sudden it is officially "Pick on Valerie Jarrett" week for pundits. In case you missed it, there have been two big hit pieces on her in the last couple of days. One from Carol Felsenthal and another from Noam Scheiber. Coincidence? You tell me.

First of all, a cornucopia of red flags should emerge right away with this:


A decade after his [Obama's] ascent, there is still a basic unknowability about him, a puzzling gap between his talents and the public’s enthusiasm for his years in office.

Scheiber saying the President is "unknowable" is basically the same thing as Chuck Todd writing a book about him titled The Stranger. Of course that doesn't stop either of them from writing thousands of words about President Obama filled with all kinds of assumptions and projections. Its nonsense. Simply by paying attention and having an internet that provides me with more information than I can process, I know this president better than another other in my lifetime - even without "insiders" whispering in my ear.

And Noam, that "gap between his talents and the public's enthusiasm" is actually a product of racism combined with a completely inept media (see: "basic unknowability" above).

Secondly, Scheiber goes on to tell all kinds of stories about Valerie Jarrett and President Obama from "unnamed insiders" and various activists. This is where he comes off sounding like just another Politico reporter. But if you are to learn anything from what he has to say, its most likely to be a confirmation of why this President so dislikes how the DC village game is played. It all comes off like a bunch of middle school girls railing about who gave them the "side-eye." A couple of them are just SURE that President Obama wasn't speaking his mind when he talked to them and that Jarrett had obviously whispered something to him behind their backs. Oh, Puhlease!!!!

Finally, the most telling part of the article comes near the end when Scheiber demonstrates that what he's writing is actually more about himself that either Obama or Jarrett.


The Obama era has been deeply disorienting for the left. Eight years ago, progressives would have delighted at the idea of a president who withdrew from Iraq, remade the rules for Wall Street, slowed the proliferation of greenhouse gases, brought the country within spitting distance of universal health care, and multiplied the rights of gays and lesbians. And yet it’s hard to be a self-respecting progressive these days and not feel a frustration that borders on disillusionment. The victories have been muddled, the errors unforced, the ambitions preemptively scaled back.

That last sentence is exactly why those of us who are pragmatists started calling folks like this "purists." I would love to have the opportunity to ask Mr. Scheiber which progressive victories in this country have avoided being muddled, error free, and scaled back. Bless your self-respecting progressive heart! You seem totally clueless about the fact that this is always how its been done.

For a guy who just suggested that this President is still basically unknowable, its interesting that - in an attempt to sooth his self-respecting heart - Scheiber actually has a label for him that explains all this: Boardroom Liberalism. Oooo, sounds bad, doesn't it?


It believes that the world works best when these elites use their power magnanimously, not when they’re forced to share it. The picture of the boardroom liberal is a corporate CEO handing a refrigerator-sized check to the head of a charity at a celebrity golf tournament.

Nope. The picture is of a CEO who gets called out in a State of the Union speech because s/he raised worker's pay when Congress refused to. How's that "forcing" working for ya, Noam?

But lets get back to Ms. Jarrett. When Barack Obama went to Washington, he knew he'd need someone he trusted to have his back. It sure wasn't going to be folks like Leon Panetta. Valerie Jarrett is that person. And so, of course she's a target.
Posted by Nancy LeTourneau