What must Republicans do to win back West Coast voters?

One of the narratives that has come out of the 2014 midterms is the idea that Democrats need to figure out how to appeal to southern white voters. What occurs to me is that this is very similar to what I remember hearing prior to the Clinton/Gore years. It became convention wisdom that the only way for Democrats to win national elections was to nominate white southerners. That's because it looked like the only way to break through the stranglehold Republicans had gained on the presidency from Nixon through Reagan (minus an assist from Watergate), was to run with Southern Governors (Carter and the Clinton). As a son of Hawaii and Illinois, Obama broke that narrative. But it seems like lately we've returned to it again.

And so this morning I've been spending some time studying this page with pictures of presidential election maps in the United States. I'm not a historian, so there's probably a lot of specifics I missed. But overall, what I see during "modern" times is a country that was very blue during the FDR years and began to turn pretty red during the Nixon/Reagan years. That's what Bill Clinton was facing in 1992 when he ran against George H.W. Bush. How did he win? Here's the map. 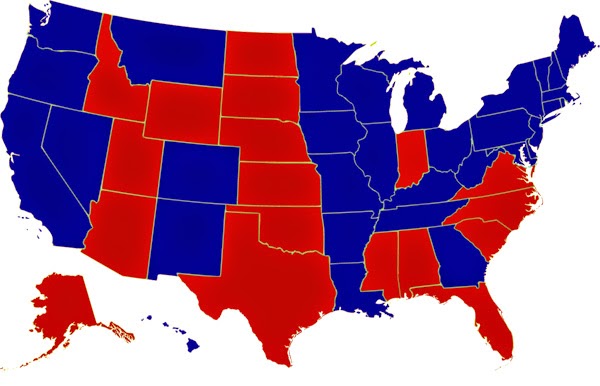 That seems to validate the idea that Clinton won because he had appeal in the south, doesn't it?

But what I noticed this morning is something I've never heard anyone mention before. It wasn't until the Clinton election in 1992 that Democrats won the west coast states (California, Oregon and Washington). For example, prior to that year, California had only gone blue once (1964) in over 40 years. Beginning that year, those 3 states turned blue and have been solid ever since. They provided Clinton with 17 more electoral votes than he won from southern states (72 vs 55).

I'll have to leave it to others to answer the question about why the west coast went blue in 1992. My point is to wonder why pundits never developed a meme about asking Republicans what they need to do to win back the west coast. I don't have the answer to that either. But its a perfect example of how a narrative (i.e., story) shapes our conversations.

P.S. I recognize that the talk lately about Democrats appealing to white southerners is in the context of midterm Congressional elections - not presidential elections. As I've said before, Democrats have some big challenges to face when it comes to midterms. So I agree...we need to have that conversation. I'd just like to suggest that the answers to those challenges could be more broad than conventional wisdom suggests.
Posted by Nancy LeTourneau