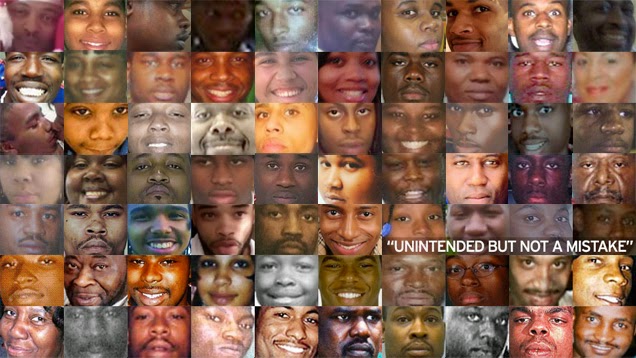 On Wednesday, after the announcement that NYPD Officer Daniel Pantaleo would not be indicted for killing Eric Garner, the NAACP's Legal Defense Fund Twitter posted a series of tweets naming 76 men and women who were killed in police custody since the 1999 death of Amadou Diallo in New York.

This is the point many activists are trying to make. It is NOT just the deaths of Michael Brown, or Eric Garner, or Tamir Rice that have fueled the reaction we're seeing. It is a very long history of this kind of abuse that has led to this moment.

So the question that spurs for me is "Why now?" As a white woman, I'm not the one to answer that. But I will share a couple of my observations.

First of all, I think back to something I wrote last spring: Who are the optimists these days? Here's a quote about that from Ellis Cose:


African-Americans, long accustomed to frustration in their pursuit of opportunity and respect, are amazingly upbeat, consistently astounding pollsters with their hopefulness.

And here's a quote I posted recently from the book The Healing by Jonathan Odell:


'Mark my words," I said, 'when a man's not afraid, then he's hoping. And that's when all hell breaks loose.'"

Offered for your consideration. What say you?
Posted by Nancy LeTourneau