Yesterday Ed Kilgore commented on an article by Steven Shepard titled: The Television Election. I too found it interesting, but reached some slightly different conclusions.

Shepard's suggestion that 2016 will be a "television election" isn't as clear as his title suggests. That's because he is simply reporting on how candidates will spend their money - not on how successful the television ads they buy with it will be.


Between campaigns and independent groups, television-ad spending during the 2016 elections is projected to top $4.4 billion. That’s more than a half-billion more than in 2012. And it’s at least four times what campaigns and groups are preparing to spend on their online strategies.

Based on the last few election cycles, we might be seeing a similar distinction between how big money works in presidential vs midterm elections as we're seeing between Democratic and Republican advantages. Case in point, a big story coming out of the 2012 presidential election was that big donors to SuperPacs got almost nothing for their money.


A study Wednesday by the Sunlight Foundation, which tracks political spending, concluded that Rove's super PAC, American Crossroads, had a success rate of just 1 percent on $103 million in attack ads -- one of the lowest "returns on investment" (ROIs) of any outside spending group in this year's elections...

The American Crossroads debacle was only the most dramatic example of the limits of big money in this election, according to the Sunlight Foundation report. About $1.3 billion was spent by outside groups overall -- about two-thirds on the Republican side -- and for the most part their returns were equally low. The Chamber of Commerce, for example, spent $31 million-and had a 5 percent return, according to the Sunlight study. The conservative American Future Fund spent $23.9 million and also realized a 5 percent return. The National Rifle Association spent $11 million, and got shut out.

Then in the 2014 midterms, all of that was turned on its head.


Rove's groups—American Crossroads, a super-PAC; and Crossroads GPS, its dark-money-funded sibling—spent heavily in 10 Senate races. The Republican won in at least six of those elections. If Republican Dan Sullivan defeats Sen. Mark Begich in Alaska (Sullivan was leading the vote count the day after the election) and GOP Rep. Bill Cassidy ousts Sen. Mary Landrieu in Louisiana's runoff next month, Rove will end up 8 for 10. The Sunlight Foundation calculates Crossroads GPS's return on investment—that is, the success rate of GPS's spending to elect or defeat candidates—at an impressive 96 percent.

The Koch brothers' flagship organization, Americans for Prosperity, had an equally stellar Election Day. At least five of the nine AFP-backed Senate candidates won. The Kochs' Freedom Partners Action Fund recorded an 85 percent ROI, according to the Sunlight Foundation.

In other words, Rove's SuperPacs went from an ROI of 1% in 2012 to 96% in 2014. I'm sure Karl would want to take credit for that unbelievable turn-around by suggesting they did a better job in 2014 after learning from their mistakes in 2012. But I think its a bigger story than that.

To break it down, it is first of all important to point out that "outside groups" spend their money almost exclusively on PR - mostly direct mail and television ads. That's because they are technically barred from coordinating with individual campaigns - who are the ones responsible for things like hiring staff to implement a "ground game."

Here's a graph that tells you who those television ads are reaching. 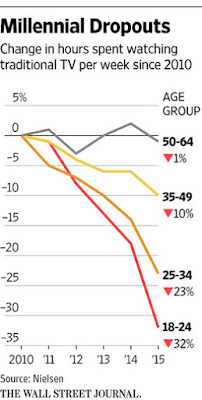 Now...add that information to the fact that voters in midterms skew older than in presidential elections and you might begin to get a picture about why big money spent on TV ads seems more successful in the former. Of course the question remains as to whether or not TV ads made a difference in 2014, or whether the outcomes would have been the same with or without them due to the make-up of those who turned out to vote.

Perhaps Shepard is right that 2016 will still be a "television election." But in the years to come, those older voters who grew up watching television will eventually be replaced with those who grew up streaming online. And the expensive TV ads will lose the impact they might have had once no one is watching.

The implications of this for campaign finance are going to be interesting to watch. Unless/until the Supreme Court re-visits decisions like Citizens United, I'm sure that people will continue to assume that money is a critical factor in election outcomes. There will be no shortage of billionaires who want to try to influence them. But as Shepard notes,

But what will the campaigns and their SuperPacs spend all that money on? Shepard seems to indicate that they haven't figured that out yet...hence, continued spending on TV ads.


But even if there is an increased emphasis on digital in 2016, campaigns and their affiliates will so well-funded that they will still spend record amounts on TV.

“It’s all up to the ability of the candidates to raise the money,” said Tracey. “Spending it won’t be a problem. If they can raise it, they’ll find ways to spend it.”