As the former executive director of a small non-profit, I can tell you that one of the tasks of any effective leader of an organization - no matter the size or mission - is to engage in succession planning. This would be even more true when a leader is term-limited in their position.

That's why around 2007 I started looking for signs from the Bush/Cheney White House about what they were doing to lay the groundwork for a next Republican president. I have to admit that I was pretty surprised when I didn't see any indication of plans/work on that.

On the other hand, almost as soon as he got re-elected to a second term, President Obama went to work on succession planning.

* Executive action on immigration
* Grassroots efforts to raise the minimum wage and enact paid sick/family leave
* New rules on overtime pay
* New EPA rules on new and existing power plants to combat climate change
* Agreements with China, India and Brazil on goals to address climate change, leading up to a global agreement at the UN Conference in December 2015
* Opening diplomatic ties with Cuba
* Working towards an agreement with Iran on it's nuclear weapons program

As I wrote recently, we are likely to see additions to that list as the Obama administration continues to play through to the end of the fourth quarter.

What we've seen from Hillary Clinton's campaign is that she is embracing these efforts and promising to build on them. And the Republicans are taking the dare. They're going all-in to oppose them. And so, between President Obama's initiatives and the Supreme Court's rulings on Obamacare and marriage equality, what we've seen lately is that the whole group of Republican candidates are on the defense, promising to undo whatever is done. Here's how Greg Sargent summed it up:

1) scrap a hard-won international agreement to curb Iran’s nuclear program
2) withdraw the U.S. from participation in a global climate accord
3) reverse the ongoing restoration of diplomatic relations with Cuba, and
4) repeal a health law that continues to expand health coverage to tens of millions of people, nearly seven years after it was signed

5) fudging on how, or whether, to overhaul our immigration system and integrate millions of undocumented immigrants already here (before “securing the border”), an issue of enormous importance to the fast-growing Latino voting bloc, and
6) continuing to hold out against same-sex marriage even as it takes hold nationwide?

Recent events suggest this scenario is a genuine possibility.

What will be interesting to observe is whether or not this defensive positioning is maintained over the next year and a half - even as Republicans decide on an actual candidate. Other than fanning the flames of fear about foreign threats and preaching about the benefits of what George Bush, Sr. called "voodoo economics," it's hard to imagine what a pro-active message would look like at this point. We'll see...

One thing we can take away from all of this is that President Obama is setting the stage extremely well for his successor. People have often critiqued his leadership. Those that amuse me the most are the one's who call him "naive" or "lucky." We have to remember that this is the guy who became the first African American president of the United States with the name Barack Hussein Obama by beating the candidate everyone assumed was "inevitable" in a well-crated primary back in 2008. The guy knows what he's doing.

UPDATE: Right on cue comes this from Jeb Bush - supposedly the "serious" candidate in the current field. He suggests that President Obama has given us a "zombie economy" based mostly on the recent drop in the labor force participation rate (LFPR). But if Betsey Stevenson from the Council of Economic Advisors is right and the drop is mostly related to the fact that the survey tracking LFRP was distributed earlier than normal last month, we're likely to see a pretty significant increase next month - negating his entire argument. That's what happens when you base your campaign on phony numbers.

But even more interesting is what Jeb proposes to do about all that. Hold onto your hats...his solution is to repeal and replace Obamacare. Right! Because that is exactly what is NOT giving us a "zombie economy." For example: 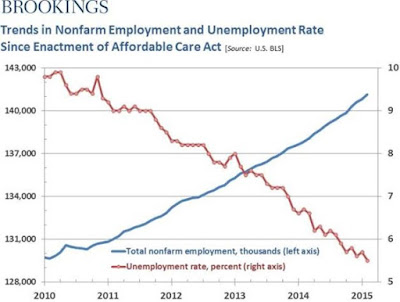