John Metta had given up talking to white people about racism. But after the shootings in Charleston, he gave this "congregational reflection" to a white church audience. It is one of the most profound explanations of why white liberals have such a hard time talking about race. I'll give you a few excerpts here. But please, go read the whole thing.

First of all, Metta explains how black people and white people see the world differently.

We don't see a shooting of an innocent Black child in another state as something separate from us because we know viscerally that it could be our child, our parent, or us, that is shot...

Racism affects us directly because the fact that it happened at a geographically remote location or to another Black person is only a coincidence, an accident. It could just as easily happen to us — right here, right now.

White people do not think in terms of we. White people have the privilege to interact with the social and political structures of our society as individuals. You are “you,” I am “one of them.”

That leads to a powerful summary of the problem:


Living every single day with institutionalized racism and then having to argue its very existence, is tiring, and saddening, and angering. Yet if we express any emotion while talking about it, we’re tone policed, told we're being angry. In fact, a key element in any racial argument in America is the Angry Black person, and racial discussions shut down when that person speaks. The Angry Black person invalidates any arguments about racism because they are “just being overly sensitive,” or “too emotional,” or, playing the race card...

But here is the irony, here’s the thing that all the angry Black people know, and no calmly debating White people want to admit: The entire discussion of race in America centers around the protection of White feelings.

Ask any Black person and they'll tell you the same thing. The reality of thousands of innocent people raped, shot, imprisoned, and systematically disenfranchised are less important than the suggestion that a single White person might be complicit in a racist system.

This is the country we live in. Millions of Black lives are valued less than a single White person’s hurt feelings.


Here’s what I want to say to you: Racism is so deeply embedded in this country not because of the racist right-wing radicals who practice it openly, it exists because of the silence and hurt feelings of liberal America.

A great man said pretty much the same thing decades ago: 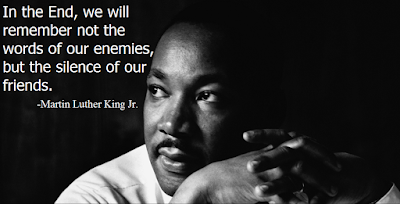