An awful lot has been written over the last few years about how polarized the American electorate has become. Underlying all that is an assumption that the polarization is rooted in policy differences. A recent set of polling questions from HuffPost/YouGov shows that assumption isn't as accurate as we've been led to believe. 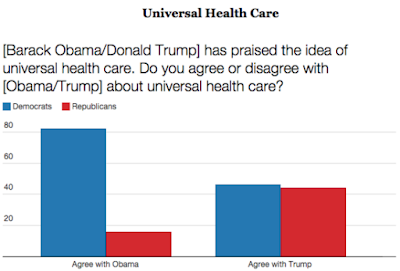 This indicates that the polarization we're seeing today in our politics is a lot more complex than we've tended to think, and is perhaps tied as much to personality (or party) as it is to policy. It is similar to the results of polling Obamacare vs the Affordable Care Act.

At the same time, more people support "Obamacare" (29%) than those who support ACA (22%.) In other words, having "Obama" in the name "raises the positives and the negatives," as CNBC put it.

The bad news is that demonization of the other side seems to be working to drive us apart. But the good news is that - if we could ever get to the point of actually discussing policy - perhaps we agree more than we think.
Posted by Nancy LeTourneau