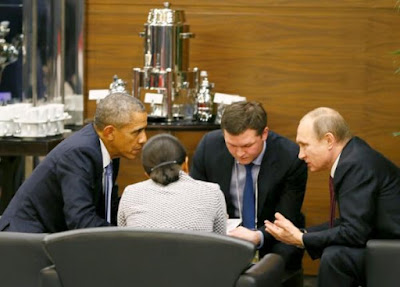 During the Democratic debate on Saturday night, John Dickerson asked each candidate respond to the Republican talking-point about whether or not they were prepared to call ISIS "radical Islamists." It is a ridiculous point to make - as if the right words were somehow determinative in an extremely complex situation. But when he got push-back from both Sanders and Clinton, Dickerson attempted to make the argument about why using the right words matters. Here's what he said:


The critique is that the softness of language betrays a softness of approach. So if this language - if you don't call it by what it is, how can your approach be effective to the cause.

That is a ridiculous argument on it's face. But what struck me was the use of the word "softness." Where have we heard that word before? It immediately took me back to the 1980's and 1990's when the big critique of Democrats was that they were "soft on crime." That is exactly what got us in this mess with mass incarceration in the first place. But it was a valuable tool for Republicans to use as a wedge against Democrats - who too often took the fear-bait and jumped into the fray in order to prove that they were "tough on crime."

I would hope that we learned a lesson from all that. Because once again, the Republicans are attempting to fear-monger us into making stupid moves in order to avoid being labeled "soft on terrorism." So it's time for Democrats to get out ahead of this kind of fear-mongering. I'd suggest they do something similar to what former Attorney General Eric Holder did to combat the "soft on crime" message...he initiated a Smart on Crime initiative. When it comes to terrorism, we'd don't need the bellicose chest-thumping we're hearing from Republicans, we need leadership that is smart on terrorism.

That is exactly what is happening in the picture above of a meeting between Obama and Putin at the G20 gathering in Turkey. It followed an announcement of real progress on the talks in Vienna about the civil war in Syria that concluded just as the attack on Paris happened.


The plan presented by the two appeared to draw heavily on a recently circulated Russian initiative. With just two weeks elapsed since the Syria talks first convened, it could mark a significant advance, if successful.

It sets a Jan. 1 deadline for the start of negotiations between President Bashar Assad's government and opposition groups. Lavrov said the Syrian government already had put forward its representatives, with the U.N. special envoy for Syria, Staffan de Mistura, to begin immediate work on determining who should sit at the table as part of the opposition team.

Within six months, the negotiations between the Syrian sides are to establish "credible, inclusive and non-sectarian" transitional government that would set a schedule for drafting a new constitution and holding a free and fair U.N.-supervised election within 18 months, according to a joint statement released by the United Nations on behalf of the 19 parties to the talks.

The attacks in Paris have made all of this work much more urgent...hence the unscheduled 30 minute meeting Sunday between Obama and Putin.

In order to defeat ISIS, the various factions fueling the civil war in Syria need to come together to resolve that conflict. On one side are Russia and Iran - who both support President Assad. On the other are various Gulf states, including Saudi Arabia, who insist that Assad be removed. Playing off that conflict is ISIS in exactly the same way they were fueled in Iraq by the anti-Sunni crackdowns from former Prime Minster al-Maliki. Dealing with those factions is the first step in uniting the world to ensure the ultimate defeat of ISIS.

I am reminded of what President Obama said to Matt Yglesias about all of this back in February.


But this is going to be a generational challenge in the Muslim world and the Middle East that not only the United States but everybody's going to have to deal with. And we're going to have to have some humility in recognizing that we don't have the option of simply invading every country where disorder breaks out. And that to some degree, the people of these countries are going to have to, you know, find their own way. And we can help them but we can't do it for them...

And so, I think the real challenge for the country not just during my presidency but in future presidencies is recognizing that leading does not always mean occupying. That the temptation to think that there's a quick fix to these problems is usually a temptation to be resisted. And that American leadership means wherever possible leveraging other countries, other resources, where we're the lead partner because we have capabilities that other folks don't have. But that way there's some burden-sharing and there's some ownership for outcomes.

That's what it means to be smart on terrorism.
Posted by Nancy LeTourneau