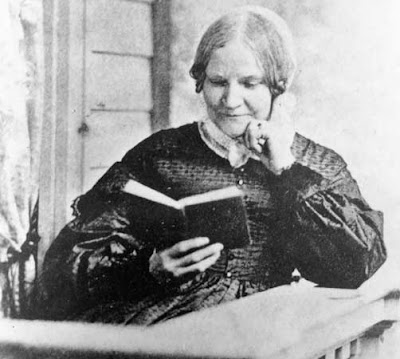 There is an awful lot of music associated with the Christmas holiday. But when it comes to Thanksgiving…not so much. If you’re anything like me, the one song you grew up singing on this holiday was “Over the river and through the woods, to grandmother’s house we go.” But until this week, I never knew anything about the origins of that song.

It comes from a poem written in 1844 by a woman named Lydia Marie Child.


Child herself had an unhappy youth: her mother was ill and remote, and her father was a strict and irascible Calvinist who was alarmed by her interest in books.

When Child was 12, her mother died, and she was sent to live in her sister’s home in the interior of Maine. There, she was free to fashion an education for herself: she found tutors at Bowdoin College, mentors at a public library, and friends among the local Indian tribes, who’d been violently uprooted from their land.

At 19, Child returned to Boston to live and study with her brother, who had graduated from Harvard and was a liberal Unitarian minister. A few years later, in 1824, she scandalized the city with her first book, Hobomok, a novel about an upper-class white woman who falls in love with and marries an Indian chief.

Over the next several decades, Child published many more provocative books, including The First Settlers of New-England (1829), an account of the atrocities committed by the Puritans against the Indians during the 17th century; An Appeal in Favor of That Class of Americans Called Africans (1833), the first major study of slavery in the United States; and The Duty of Disobedience to the Fugitive Slave Act: An Appeal to the Legislators of Massachusetts (1860).

Though Child’s political writing made her a celebrity, it didn’t make her much money. Luckily, she also had a knack for creating children’s literature with broad commercial appeal. “The New-England Boy’s Song About Thanksgiving Day” was part of a popular collection of poems and stories she wrote for eight- and nine-year-olds; the verses were later set to music.

So if you happen to hear her song today, take a bit of courage from someone who fought against the white male patriarchy of her day…decades ahead of her time.
at November 26, 2015