Does Anyone Else Remember When Republicans Loved Bill Clinton? 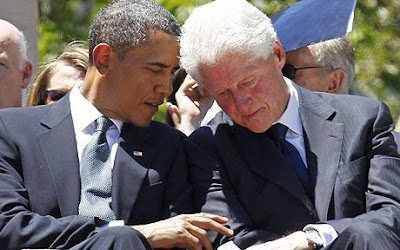 For years they tried to dig up any possible scandal on Bill Clinton and were eventually able to impeach him in the House. And now that his wife is running for president, they're digging up all the old dirt. But I actually remember when Republicans said things like this about him:

Paul Ryan: "Bill Clinton was a different kind of Democrat than Barack Obama."

Mike Huckabee: "I think the pragmatic way in which Bill Clinton governed as president makes even Republicans want to get the bumper strips that say, 'I miss Bill,' because he understood that in governing you do have to sit down and work out your differences."

John Sununu: "President Clinton's keynote address in Charlotte today will serve to remind the world of a time when the leadership of the Democratic Party took fiscal responsibility seriously. It might even induce nostalgia for the days of balanced budgets and bipartisan accomplishments such as welfare reform."

That's just a taste of some of the things we heard in 2012 when Republicans decided on a strategy of pretending to have some deep seeded respect for Bill Clinton in order to paint a distorted picture of distance between his presidency and that of Barack Obama's.

We all know that with our 24/7 cable news coverage, four years can seem like a lifetime ago. But I, for one, haven't forgotten. That's just one of the reasons why I don't take Republicans seriously when they engage in these kinds of attacks. They are saying whatever they think will damage the opposition. And in doing so, lose all credibility.

In the meantime, the prospect of the two guys in the picture above uniting to work on getting Hillary Clinton elected as our next president…powerful!
Posted by Nancy LeTourneau