The Source of President Obama's Optimism 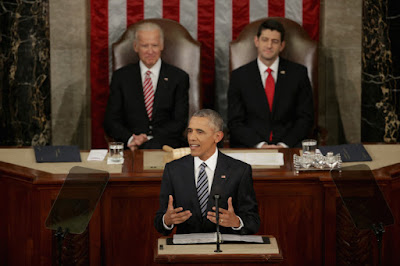 On the day President Obama was first inaugurated, he faced two big challenges. The first was dealing with the mess that was left to him by his predecessor: two intractable wars, Osama bin Laden alive and reconstituting his network of terrorism, and an economy in free fall. But while taking on those issues, he also faced the challenge of Congressional Republicans who had developed a strategy to deal with the fact that their domestic and foreign policies had not only failed, but led to the Democrats controlling the White House and both both houses of Congress. That strategy was eventually articulated publicly by former Republican Congressional staffer Mike Lofgren.


A couple of years ago, a Republican committee staff director told me candidly (and proudly) what the method was to all this obstruction and disruption. Should Republicans succeed in obstructing the Senate from doing its job, it would further lower Congress's generic favorability rating among the American people. By sabotaging the reputation of an institution of government, the party that is programmatically against government would come out the relative winner.

...There are tens of millions of low-information voters who hardly know which party controls which branch of government, let alone which party is pursuing a particular legislative tactic. These voters' confusion over who did what allows them to form the conclusion that "they are all crooks," and that "government is no good," further leading them to think, "a plague on both your houses" and "the parties are like two kids in a school yard." This ill-informed public cynicism, in its turn, further intensifies the long-term decline in public trust in government that has been taking place since the early 1960s - a distrust that has been stoked by Republican rhetoric at every turn.

We are now witnessing the relative success of that strategy in various discussions about why Americans are so angry, cynical and distrustful of government. It's what Republicans have been working on all along. But it has also led to the fact that their two front-runners for the Republican presidential nomination are Donald Trump and Ted Cruz.

That is the arena into which President Obama stepped last night to give his final State of the Union Address. And it is why he ended his speech with some discussion about a "better politics."


"We the people." Our Constitution begins with those three simple words, words we’ve come to recognize mean all the people, not just some; words that insist we rise and fall together. That brings me to the fourth, and maybe the most important thing I want to say tonight.

A better politics doesn’t mean we have to agree on everything. This is a big country, with different regions and attitudes and interests. That’s one of our strengths, too. Our Founders distributed power between states and branches of government, and expected us to argue, just as they did, over the size and shape of government, over commerce and foreign relations, over the meaning of liberty and the imperatives of security.

But democracy does require basic bonds of trust between its citizens. It doesn’t work if we think the people who disagree with us are all motivated by malice, or that our political opponents are unpatriotic. Democracy grinds to a halt without a willingness to compromise; or when even basic facts are contested, and we listen only to those who agree with us. Our public life withers when only the most extreme voices get attention. Most of all, democracy breaks down when the average person feels their voice doesn’t matter; that the system is rigged in favor of the rich or the powerful or some narrow interest.

That is quintessential Obama. If you don't understand the basics of what he is saying here, almost nothing he does will make sense to you. In his quest to forge an identity out of the the divergent forces of his own personal background, Barack Obama crafted a world view that values those differences and the wisdom that comes from the democratic process of respectful - if sometimes heated - dialogue. Even more than any one particular policy position, President Obama elevates that process as the priority for the survival of our democracy.

The reason the Republicans have adopted a strategy of spreading fear, anger, cynicism and distrust is because that form of engaged democracy is the biggest threat to their interests. And so yes, as some commentators noticed last night, the President returned once again to his theme of hope and change. The reason he has been able to maintain that position after these long seven years of frustration with their tactics is that he doesn't look to politicians as the source of that hope. His focus is elsewhere.


Voices that help us see ourselves not first and foremost as black or white or Asian or Latino, not as gay or straight, immigrant or native born; not as Democrats or Republicans, but as Americans first, bound by a common creed. Voices Dr. King believed would have the final word - voices of unarmed truth and unconditional love.

They’re out there, those voices. They don’t get a lot of attention, nor do they seek it, but they are busy doing the work this country needs doing.

I see them everywhere I travel in this incredible country of ours. I see you. I know you’re there. You’re the reason why I have such incredible confidence in our future. Because I see your quiet, sturdy citizenship all the time.

I see it in the worker on the assembly line who clocked extra shifts to keep his company open, and the boss who pays him higher wages to keep him on board.

I see it in the Dreamer who stays up late to finish her science project, and the teacher who comes in early because he knows she might someday cure a disease.

I see it in the American who served his time, and dreams of starting over - and the business owner who gives him that second chance. The protester determined to prove that justice matters, and the young cop walking the beat, treating everybody with respect, doing the brave, quiet work of keeping us safe.

I see it in the soldier who gives almost everything to save his brothers, the nurse who tends to him ’til he can run a marathon, and the community that lines up to cheer him on.

It’s the son who finds the courage to come out as who he is, and the father whose love for that son overrides everything he’s been taught.

I see it in the elderly woman who will wait in line to cast her vote as long as she has to; the new citizen who casts his for the first time; the volunteers at the polls who believe every vote should count, because each of them in different ways know how much that precious right is worth.

That’s the America I know. That’s the country we love. Clear-eyed. Big-hearted. Optimistic that unarmed truth and unconditional love will have the final word. That’s what makes me so hopeful about our future. Because of you. I believe in you. That’s why I stand here confident that the State of our Union is strong.

That is the source of this President's optimism that we can heal our flailing democracy - one that was designed to be a government of, by and for those people he described.
Posted by Nancy LeTourneau