It's happened again...like so many times during the Obama era. Just when I get down about where things seem to be going in this country, we learn about the work President Obama and Secretary Kerry have been doing to negotiate the release of prisoners in Iran (check out that link for some fascinating details).

This kind of thing has happened so often that when I get discouraged, I actually hear a little voice inside my head saying, "hold on...something good is going to happen soon to reignite your hope." That is President Obama's legacy at work in my brain.

I am reminded of another time when that happened. Almost a year ago I was getting angry at all the talk about how the President probably wasn't a Christian and didn't love this country. And then he gave his speech at the 50th anniversary of the march in Selma. It was not only an incredibly inspiring speech, it was a direct challenge to all the nonsense we'd been hearing about him.


...what could be more American than what happened in this place? What could more profoundly vindicate the idea of America than plain and humble people –- unsung, the downtrodden, the dreamers not of high station, not born to wealth or privilege, not of one religious tradition but many, coming together to shape their country’s course?

What greater expression of faith in the American experiment than this, what greater form of patriotism is there than the belief that America is not yet finished, that we are strong enough to be self-critical, that each successive generation can look upon our imperfections and decide that it is in our power to remake this nation to more closely align with our highest ideals?

That’s why Selma is not some outlier in the American experience. That’s why it’s not a museum or a static monument to behold from a distance. It is instead the manifestation of a creed written into our founding documents: “We the People…in order to form a more perfect union.” “We hold these truths to be self-evident, that all men are created equal.”

These are not just words. They’re a living thing, a call to action, a roadmap for citizenship and an insistence in the capacity of free men and women to shape our own destiny.

So yes, Barack Obama loves America. Sometimes - like a lot of us - he's not real fond of our politics. But, as I wrote the other day, it is the people of this country who inspire his optimism. When I get discouraged with all the talk about how angry and fearful Americans are these days, I question that optimism. That's why, when I saw this quote the other day, it all made sense to me. 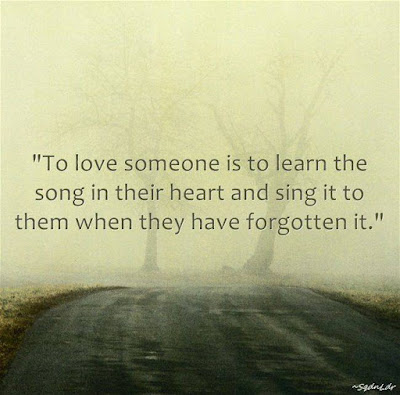 President Obama isn't simply ignoring the anger and fear. Because he loves this country, he is singing the song in our hearts that many of us have forgotten...sometimes figuratively and sometimes literally.