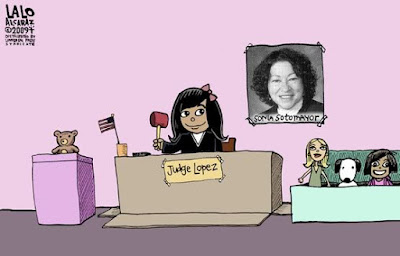 As I look at the lists that many people have compiled on President Obama's likely choices for a Supreme Court nominee, I am struck by the deep bench he has to chose from - especially when it comes to women and people of color.

The first thing to note is that affirmative action policies deserve a lot of the credit. One need only look at the journey Sonia Sotomayor took from the Puerto Rican projects of the Bronx to the Supreme Court for a perfect example of that.

But in addition, one of this President's most important legacies is the extent to which he has stacked the deck (so to speak) in the lower courts, which many people consider to be the feeder system for Supreme Court nominations. That is the subject of an article by Max Ehrenfreund that is rather devilishly titled: The number of white dudes becoming federal judges has plummeted under Obama. As he notes, that is not an accident.


"I think there are some particular groups that historically have been underrepresented—like Latinos and Asian-Americans—that represent a larger and larger portion of the population," the president told The New Yorker in 2014. "For them to be able to see folks in robes that look like them is going to be important."

That is precisely why the cartoon above is one of my very favorites.

When it comes to those lower courts, the graphs say it all. 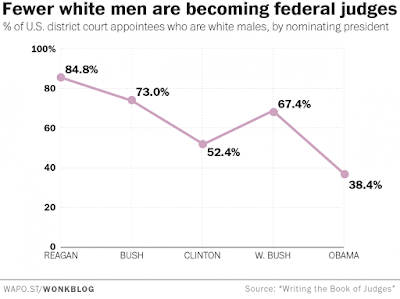 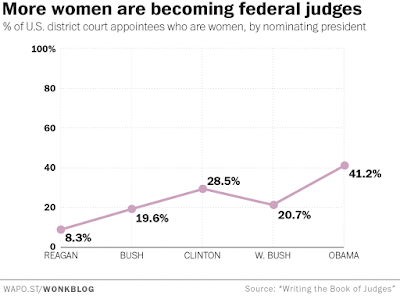 That is tremendous change since the Reagan years. Additionally, as Ehrenfreund notes:

Of course this is exactly the kind of change that terrifies the conservative insurgency. But for the rest of us, it is a victory to keep in mind as we tally the legacy of our 44th President and consider the wealth of talent he has to chose from in a Supreme Court nominee.
at February 18, 2016