VP Biden Reminds Us that We've Gone From Crisis to Recovery 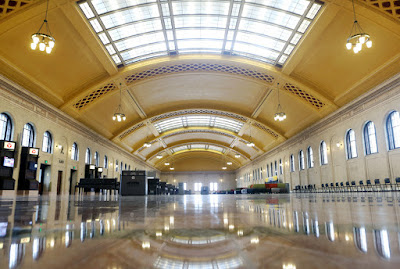 Yesterday Vice President Biden was in my neck of the woods on his travels around the country to highlight success stories on the 7th anniversary of the signing of the American Recovery Act. His stop here was to showcase the renovation of the Union Depot in downtown St. Paul, MN. Here's just a bit of background:


The neoclassical depot was built in the 1920s and remained St. Paul’s entry point for passenger trains until 1971, when it fell into disuse.

It came back to life in 2012 after a $124.3 million injection of federal transit and stimulus money, with about $105 million from the Ramsey County Regional Rail Authority. The state chipped in $13.7 million.

The Vice President had a message to send.


“I’m here in Union Depot to show what private-public partnerships are all about, how they can stimulate investment,” Biden said...

Biden told the crowd of 250 people that the Obama administration made “a lot of tough decisions” during the financial crisis...

“We’ve gone from crisis to recovery, and I’m so tired of hearing everybody talking down America’s prospects,” Biden said.

That sentiment came up again during an interview with Michael Grunwald later in the day. When asked whether or not he was surprised that it isn't just Republican candidates talking doom and gloom in this presidential race, here's how he responded.


I am surprised. Take a look at all the campaigns in the last cycle. The only Democrats who won close races were the ones that stuck with the administration, talked about the record…My generic point is, you get behind the curve. Even my own folks say, jeez, Joe, you got 60-70% of the American people think we’re going in the wrong direction. Don’t try to buck it. What do you mean, don’t try to buck it? If everybody doesn’t buck it, guess what, it’s gospel...

I think both Hillary and Bernie are basically on the same page, with different emphasis, on college, Wall Street, the 1%, civil rights, etcetera. What I don’t think they’re spending enough time doing is pushing back on the story line that what we did to get us to this point was a failure and a mistake.

I'll leave it up to you to decide whether or not he has fairly captured the approach of these candidates. But overall, I think he's right. This country has made tremendous progress economically over the last 7 years. Of course there is work yet to be done. But to the extent that the successes are not acknowledged and celebrated, they are dismissed and forgotten. That not only feeds the Republican narrative, it leads to cynicism and makes it difficult to build on what has already been accomplished.

Personally, I remember what Union Depot and that area of downtown St. Paul looked like before this renovation. I've also seen what it looks like now. The symbolism of that transformation pretty much captures why I think VP Biden is right.
Posted by Nancy LeTourneau