President Obama Commutes the Sentences of Another 61 Individuals 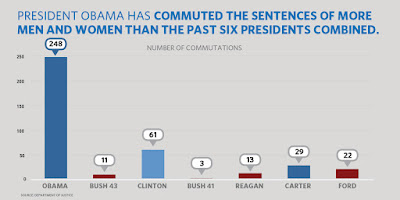 From the White House:

This is the result of the President's Clemency Initiative that has focused on commuting the sentences of individuals who meet the following criteria:

* They are currently serving a federal sentence in prison and, by operation of law, likely would have received a substantially lower sentence if convicted of the same offense(s) today;

* They are non-violent, low-level offenders without significant ties to large scale criminal organizations, gangs or cartels;

* They have served at least 10 years of their prison sentence;

* They do not have a significant criminal history;

* They have demonstrated good conduct in prison; and

* They have no history of violence prior to or during their current term of imprisonment.

Presidents have the power to either pardon or commute the sentences of individuals convicted of federal crimes.


In modern times, presidential clemency usually takes one of two forms: pardons, which constitute a full forgiveness for a crime and restore civil rights like voting and gun ownership, and commutations, which shorten prison sentences and usually have conditions attached.

Some have critiqued President Obama for not issuing more pardons. Although he has granted a total of 70 so far, that is far fewer than most modern presidents. In that sense, this President has flipped the precedent set by previous administrations on these two powers. I would suggest that there are two reasons for that.

First of all, Obama was not impressed with the traditional use of presidential pardons.


The president complained that the pardon attorney's office favored petitions from wealthy and connected people, who had good lawyers and knew how to game the system. The typical felon recommended for clemency by the pardon attorney was a hunter who wanted a pardon so that he could apply for a hunting license.

Secondly, as Neil Eggleston wrote in the White House article cited above, President Obama initiated this Clemency Initiative as a way to push for more permanent criminal justice reforms.


Despite the progress we have made, it is important to remember that clemency is nearly always a tool of last resort that can help specific individuals, but does nothing to make our criminal justice system on the whole more fair and just. Clemency of individual cases alone cannot fix decades of overly punitive sentencing policies. So while we continue to work to resolve as many clemency applications as possible - and make no mistake, we are working hard at this - only broader criminal justice reform can truly bring justice to the many thousands of people behind bars serving unduly harsh and outdated sentences.

To date, this administration has used both commutations and the retroactive application of the Fair Sentencing Act to address specific injustices that exist in the criminal justice system. In order to take the next step, Congress needs to act.
Posted by Nancy LeTourneau