No, Amy Coney Barrett Is Not the New Feminist Icon 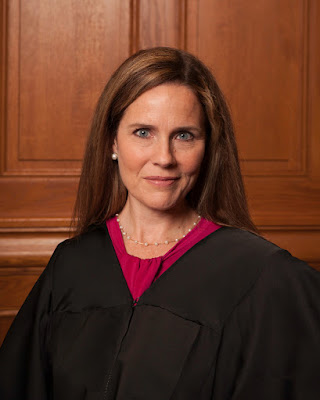 By all accounts Amy Coney Barrett is an intelligent woman. Noah Feldman, who expects to disagree with her on most of her future opinions and votes, described Barrett as "a brilliant and conscientious lawyer." Of course, she seems to have grown up in a fairly privileged environment, as the daughter of a lawyer with Shell Oil Company and a high school French teacher. Living in the suburbs of New Orleans, Barrett attended an all-girls private high school before going on to college and graduate school. But as intelligent as Barrett might be, she is not a "new feminist icon," as Erika Bachiochi has written.

Let's take a look at how Bachiochi makes that claim. The entire argument is based on the fact that Barrett and her husband are the parents of seven children. In the ultimate "you can have it all," they've done so while advancing their professional careers. Barrett has suggested that it's all about teamwork.

We were open to either one of us staying home at different points. … What’s really made it work is that it’s very much a team effort. … Right now … Jesse is really doing much more of the heavy lifting … the cooking and kids’ doctor’s appointments during the day. We’ve gone in cycles and right now … he’s doing a little bit more of the home stuff. ... We evaluated at every step whether things were working well for the family, for the job I was in … but it was always working and it worked well: the kids were very happy, I loved teaching.

In addition, Barrett credits her husband's aunt, who provided child care for more than a decade. Even though women all over the globe have been teaming up with their children's fathers and extended family members to care for their children for decades now, Bachiochi seems to think that this arrangement is somehow unique to Barrett and poses a "new feminism."

Bachiochi uses that argument to write that Barrett "builds upon the praiseworthy antidiscrimination work of Ginsburg" by insisting on equal responsibilities (not just rights) for men and women.

In this new feminism, sexual equality is found not in imitating men’s capacity to walk away from an unexpected pregnancy through abortion, but rather in asking men to meet women at a high standard of mutual responsibility, reciprocity and care.

Call us greedy, but actual feminists want both. We want the ability to chose what to do with our bodies AND for men to share in the responsibilities of caring for their children.

In pointing out that workplace accommodations have also been a significant contributor to Barrett's ability to pursue both motherhood and a career, Bachiochi actually suggests that women should have MORE babies in order to press harder for those accommodations. See if you can catch the flaw in this one.

[Barrett] points to the flexibility of her workplace and credits the growing presence of women in the legal profession as giving rise to better working conditions than when she was a young lawyer: “As women are more present in law schools … on faculties, at law firms … the workplace bends to be more flexible as women seek those accommodations.” As women seek those accommodations … by bearing and raising children rather than sacrificing their very lives on the altar of the marketplace instead.

This is where privilege raises its ugly head. Law schools and law firms might be more responsive to the needs of a pregnant woman than the shift manager at McDonalds. Bachiochi takes her point a step further and actually blames Roe v Wade for allowing women to have abortions rather than press employers for accommodation. It's almost as if, in her world, sexism doesn't exist. She implies that women would be more valued in the workplace if they simply didn't have abortions.

For Bachiochi, the lives of women who are less fortunate aren't even acknowledged—those who struggle on their own (often without extended family) to put food on the table by working at jobs that don't even provide sick leave, much less maternity leave. A woman working at a minimum wage job could march right up to the boss's office and tell them that she demands accommodation for a pregnancy...and she'd be bounced out as fast as you can say "feminist icon."

As we honor Justice Ruth Bader Ginsburg, it is helpful to remember that she was a feminist icon precisely because she understood how a Supreme Court ruling can effect poor women. Here's what she told Jay Rosen about the consequences of overturning Roe v. Wade.

If we imagine the worst-case scenario, with Roe v. Wade overruled, there would remain many states that would not go back to the way it once was. It doesn’t matter what Congress or the state legislatures do, there will be other states that provide this facility, and women will have access to it if they can pay for it. Women who can’t pay are the only women who would be affected.
Roe v. Wade was decided in 1973. Two generations of young women have grown up understanding that they can control their own reproductive capacity and in fact their life’s destiny. We will never go back to the way it once was. Roe v. Wade, in its time, was not all that controversial. It was a seven-to-two decision, only two dissenters. Even at the time of Roe v. Wade, there were four states where a woman who wanted an abortion, at least in the first trimester, could have access to a safe, legal abortion. And now, it would be a lot more than four states. What that means is any woman who has the wherewithal to travel, to take a plane, to take a train to a state that provides access to abortion, that woman will never have a problem. Any woman who has the means to travel from one state to another—you don’t have to go to Japan or Cuba—will have access to a safe abortion. So it’s the poor people—whatever the state legislation may be, whatever the Court may do—it is only poor women who will suffer.

In that perspective, Ginsburg was demonstrating what former President Barack Obama outlined as the third quality he looked for in a Supreme Court nominee. They included not only that the person be imminently qualified and recognize the role of the judiciary, but also this:

The third quality I seek in a judge is a keen understanding that justice is not about abstract legal theory, nor some footnote in a dusty casebook.  It’s the kind of life experience earned outside the classroom and the courtroom; experience that suggests he or she views the law not only as an intellectual exercise, but also grasps the way it affects the daily reality of people’s lives in a big, complicated democracy, and in rapidly changing times.  That, I believe, is an essential element for arriving at just decisions and fair outcomes.

To qualify for a seat on the Supreme Court—and even more so as a feminist icon—a nominee must have either lived on the margins of society or have the ability to empathize with those who are less privileged. I have seen nothing to indicate that Amy Coney Barrett, for all of her supposed intelligence, passes that test.