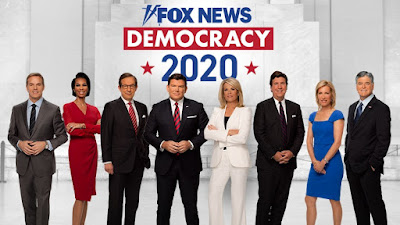 Donald Trump has made it perfectly clear how he plans to try to steal the election. He'll declare victory on election night and then attempt to stop the counting of mail-in ballots via his disinformation campaign about fraud. His hope is to create enough chaos to force the issue to the Supreme Court or Congress, where he expects to have the advantage.

The Biden campaign and Democrats have assembled a team to handle the legal challenges. But this will be a public relations battle as well. That's where the role of the media will come into play and, as I've already suggested, they should be planning now for how they will handle the scenario that the president has telegraphed will come.

Recognizing all of that, David Ignatius at the New York Times talked to senior political journalists at Fox News, ABC, CBS, CNN, and NBC to find out how they are planning to cover "the results of a presidential contest unlike any other in our history." What he heard is somewhat reassuring.

David Chalian, the political director at CNN, explained: 'If someone out there is claiming victory, and we haven’t counted the vote yet and made a call, we have to be clear that the facts don’t back up that claim. . . . One thing that’s critical is that we be as transparent as possible about what is and isn’t in the vote count, and what we know about the still-outstanding vote.'

Even Bret Baier, who will be co-anchoring election night coverage for Fox News, said that "If the difference in the number of absentee ballots yet to be counted is too large, you can’t make the call.”  Will Baier's statement hold sway under the scenario posed by Ben Smith?

The nightmare scenario goes like this: It’s a close race, and Mr. Trump leads in the early vote count in Pennsylvania, and needs just that state to win the election. Tens of thousands of votes are still untallied, and the counting may take weeks — but Mr. Trump has already declared that he’s been re-elected. He’s demanding that Fox do the same, making calls to Fox Corporation’s co-chairman, Rupert Murdoch, or working back channels to the executive who effectively runs the network, Viet Dinh. Mr. Trump’s most loyal acolytes at Fox, the prime-time hosts Sean Hannity and Laura Ingraham, are backing the president’s claim on the air. And Fox faces the temptation it often succumbs to: offering its audience the alternate reality it wants.

Smith used that scenario to introduce us to Arnon Mishkin, who is in charge of the decision desk at Fox News. You might remember that on election night 2012, Karl Rove challenged a call by the decision desk that Barack Obama had won the state of Ohio. In response, Megan Kelly brought Mishkin on camera. He emphatically stood by his call and, as it turned out, he was right.

Smith describes Mishkin and Fox News pollster Dana Blanton as "wonky reality-based election nerds" who operate fairly independently due to a rather chaotic hierarchy at the organization. That's why we regularly see tweets like this from the president.

.@FoxNews is out with another of their phony polls, done by the same group of haters that got it even more wrong in 2016. Watch what happens in November. Fox is terrible!

Trump is going to at least need Fox News to back up his declaration of victory on election night in order to spark the kind of chaos he hopes to create. That could set up an epic showdown that will make the one between Mishkin and Rove in 2012 look like child's play. It might be worth renewing my cable subscription just to watch that one.