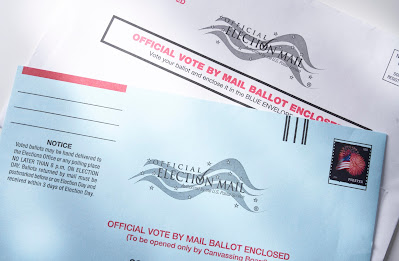 At Wednesday’s debate, when Pence was asked what his role would be if Biden won the election and Trump refused a peaceful transfer of power, the vice president packaged several right wing lies into a grand evasion of the question, ending with a suggestion that mail-in voting creates “a massive opportunity for voter fraud.” In doing so, he affirmed the lie Trump will use to create chaos about the outcome of the election.

While fact-checkers have debunked that lie over and over again, polling shows that nearly half of Republicans believe that mail-in voter fraud is a “major problem.” If Trump is able to convince a large share of his supporters that counting mail-in ballots amounts to Democrats stealing the election, it could pave the way for massive civil unrest.

According to a recent report published by the Berkman Klein Center at Harvard, those poll results stem from the fact that Donald Trump, his campaign, and the Republican National Committee have engaged in a strategic disinformation campaign about mail-in voter fraud that has been “elite driven and mass media led.”

Our findings here suggest that Donald Trump has perfected the art of harnessing mass media to disseminate and at times reinforce his disinformation campaign by using three core standard practices of professional journalism. These three are: elite institutional focus (if the President says it, it’s news); headline seeking (if it bleeds, it leads); and ​balance​, neutrality, or the avoidance of the appearance of taking a side.

The report documented activity from major media outlets, right wing news sites, and social media related to mail-in ballot fraud from late March through August 2020. In just one example, the report notes that, during a press briefing on April 3, Trump said that “a lot of people cheat with mail-in voting.” That tapped into the first and second core standard practices of professional journalism: the president publicly said something explosive.

The Associated Press—which is syndicated both nationally and in local papers all over the country—demonstrated the observance of neutrality with a headline the next day that read: “Trump, Dems clash on boosting mail-in voting during the pandemic.” Instead of pointing out that the president was lying, the issue was framed as a “clash” between Republicans and Democrats over how to vote during a pandemic. It was a classic case of bothsiderism.

The Berkman Klein Center found that every piece of disinformation about mail-in ballot fraud during that time period originated with the president, his campaign, or the Republican National Committee—with one exception. On April 24, RealClearPolitics published an article by Mark Hemingway titled “29 Million Mail-In Ballots Went Missing in Last Four Elections,” which I wrote about here at the Washington Monthly at the time. Hemingway based the entire piece on data from the Public Interest Legal Foundation (PILF), a conservative organization dedicated to purging voter rolls and spreading claims about voter fraud. His story was initially picked up by conservative outlets like the New York Post and Gateway Pundit. Tony Perkins, president of the Family Research Council, wrote a similar piece that was syndicated at several right wing sites. On April 30, Hemingway’s article was tweeted by his wife, Mollie Hemingway, who writes for The Federalist. It was retweeted by Trump the next day.

While news sites like RealClearPolitics and the Federalist were previously considered to be reputable center-right publications, they are now firmly rooted in the kind of conspiracy-mongering that has infected conservative media during the Trump presidency.

Here is how the Berkman Klein Center report concludes:

When President Trump concluded his performance in the first presidential debate on September 29, 2020, he reiterated the false claim that mail-in ballots were subject to mass election fraud, and cited this concern to justify his refusal to commit to accepting the results of the election should he be defeated. This assertion capped a six months long disinformation campaign waged by the president and his party against expansion of mail-in voting during the pandemic of 2020. ​There is no disinformation campaign more likely to affect voter participation in the 2020 U.S. election and perceptions of the election’s legitimacy than the repeated false assertion that mail-in voting is fraught with the risk of voter fraud.

Since that report was published, Vice President Pence also closed his performance in a debate by repeating the false claim that mail-in ballots are subject to fraud. We now know the strategy they’ve used to spread that disinformation campaign and can be sure they will continue to employ it as long as it works for them. That’s why the report ends with advice for the mass media outlets whose standard practices have been exploited by the president.

In the coming months, it will be critical for editors of these national and local media...not to fall for the strategy that the president has used so skillfully in the past six months, not to capitulate to the inevitable charges of partisanship that will befall any journalists and editors who call the disinformation campaign by its name, and not to add confusion and uncertainty to their readers, viewers, and listeners by emphasizing false equivalents...

That is obviously a lesson that some, but not all members of the media have learned over the last four years. In the case of Trump’s disinformation campaign about mail-in ballots, the stakes are too high for them to get this one wrong.