For the GOP, It's the Gamers vs the Breakers 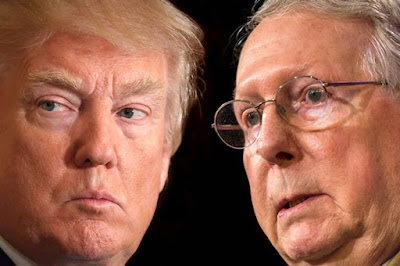 There's a lot of talk these days about the chasm that is developing in the Republican Party. No one has nailed the split better than Yale history professor Timothy Snyder. He contends that the battle is between the gamers and the breakers.

One group of Republicans is concerned above all with gaming the system to maintain power, taking full advantage of constitutional obscurities, gerrymandering and dark money to win elections with a minority of motivated voters. They have no interest in the collapse of the peculiar form of representation that allows their minority party disproportionate control of government...

Yet other Republicans saw the situation differently: They might actually break the system and have power without democracy...For some Republicans, the invasion of the Capitol must have been a shock, or even a lesson. For the breakers, however, it may have been a taste of the future.

Of course, the leader of the gamers is Senator Mitch McConnell, who initially went along with Trump's big lie about the election being stolen, only to eventually turn on the former president and say that, "The voters, the courts, and the states have all spoken. If we overrule them, it would damage our republic forever.”

Donald Trump was the ultimate breaker. That was obvious from the moment he entered the Oval Office. But his attempt to incite a group of insurrectionists to overturn the results of an election came as close to breaking our system of government that any of us have witnessed in our lifetimes. In those efforts, he was joined by people like Senators Ted Cruz and Josh Hawley, both of whom have demonstrated that they are also breakers.

None of this is a new phenomenon.

In the four decades since the election of Ronald Reagan, Republicans have overcome the tension between the gamers and the breakers by governing in opposition to government, or by calling elections a revolution (the Tea Party), or by claiming to oppose elites. The breakers, in this arrangement, provide cover for the gamers, putting forth an ideology that distracts from the basic reality that government under Republicans is not made smaller but simply diverted to serve a handful of interests.

At first, Trump seemed like a threat to this balance. His lack of experience in politics and his open racism made him a very uncomfortable figure for the party; his habit of continually telling lies was initially found by prominent Republicans to be uncouth. Yet after he won the presidency, his particular skills as a breaker seemed to create a tremendous opportunity for the gamers. Led by the gamer in chief, McConnell, they secured hundreds of federal judges and tax cuts for the rich.

Exploiting the breakers worked fine for McConnell when it came to obstructing everything Democrats attempted to accomplish during the Obama years, followed by stacking the courts with extremists judges and getting tax cuts for the rich during the Trump administration. But on January 6, the monster got loose—threatening to break our republic.

Adam Jentleson, a former top Democratic Senate aide and the author of “Kill Switch,” a new book about the Senate, told Jane Meyer that:

The glue that kept the Tea Party and establishment Republicans together during the past few years was tax cuts and judges. And McConnell can’t deliver those anymore...You need to marry the forty per cent that is the Trump base [breakers] with the ten per cent that’s the establishment [gamers]. McConnell is like a cartoon character striding aside a crack that’s getting wider as the two plates drift farther apart. They may not come back together. If they can’t reattach, they can’t win.

Notice that neither side is putting forth an actual agenda to address the issues we face as a country. The gamers want to exploit the system for power and the breakers are willing to sacrifice our democracy to gain power.

The picture isn't as bleak as Jentleson suggests, though. The two sides will eventually unite against a common enemy: President Joe Biden and the Democrats. If that's the course they take, this is our new president's answer (emphasis mine):

I know the forces that divide us are deep and they are real, but I also know they are not new. Our history has been a constant struggle between the American ideal that we're all created equal and the harsh, ugly reality that racism, nativism, fear, demonization have long torn us apart. The battle is perennial and victory is never assured.

Through civil war, the Great Depression, world war, 9/11, through struggle, sacrifice and setbacks, our better angels have always prevailed. In each of these moments, enough of us have come together to carry all of us forward. And we can do that now.