Dear Texans: A Little Socialism Wouldn't Be Such a Bad Thing 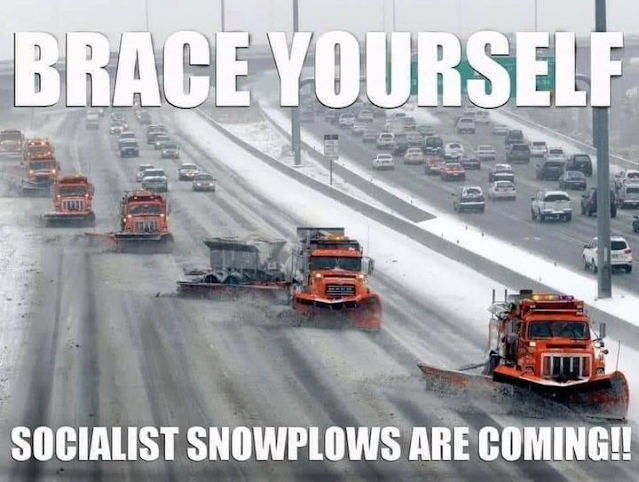 That image became one of my favorite memes when Republicans once again got obsessed with accusing Democrats of being "socialists" during the 2020 election—especially as someone who lives in the tundra, otherwise known as Minnesota.
But with the brutal weather that is crippling so much of the country this week, an awful lot of people in red America are learning the hard way about the role of government in helping us survive when mother nature unleashes her fury. Nowhere is that more true than Texas, where blackouts have left many without power and heat.
While Governor Abbot is intent on blaming frozen wind turbines, the actual culprit is a bill that was signed back in 1999 by none other than former Governor George W. Bush that deregulated the electricity market.
As everyone scrambles to point fingers about the current crisis, lets go back to an article written by Loren Steffy at Texas Monthly in 2014. Apparently this isn't the first time the state has experienced blackouts as a result of extreme weather.

Just after seven a.m. on January 6, as Texans awakened to one of the coldest mornings in years, an email and social media alert went out from the Electric Reliability Council of Texas: “Reduce electric use now. Risk of power outages exist throughout Texas. Power warning in effect.” The last time a hard freeze gripped Texas so tightly, in February 2011, power blackouts rolled across much of the state as ERCOT, which operates the state’s power grid, struggled to meet the demand. Then, just as in January, power plants unexpectedly went offline when the state needed them most. This time blackouts were averted, but barely.
This isn’t the free-market wonderland that lawmakers envisioned back in 1999 when they voted to deregulate electricity, turning most of the state’s power system over to private companies. That decision, which was helped along by some arm-twisting from Houston’s Enron Corporation, was supposed to result in a robust market, thriving with competition, which would drive down prices for consumers, unleash a host of twenty-first-century innovations, and boost reliability by encouraging newer—and greener—generating plants...“Competition in the electric industry will benefit Texans by reducing monthly rates and offering consumers more choices about the power they use,” said a euphoric Governor George W. Bush.

First of all, Bush's promise of lower monthly rates didn't turn out to be true. According to a 2014 report by the Texas Coalition for Affordable Power (TCAP), "deregulation cost Texans about $22 billion from 2002 to 2012. And residents in the deregulated market pay prices that are considerably higher than those who live in parts of the state that are still regulated." There are several complicated reasons for those increased costs. But one of them is especially pernicious. With profit as the only goal for a deregulated industry, the possibility of gaming the system was unleashed.

On a typical day, power on the wholesale market sells for between $30 and $100 per megawatt hour. But during January’s cold snap, prices spiked to $5,000. At times like that, generators make big money, which creates an incentive to withhold power from the market. “They know if they hold back and get into real shortages, they will reap tremendous rewards,” Hirs says. Electricity traders have raised questions about suspicious activity that suggests withholding has been going on, but no one has proved anything. What we do know is that the free market isn’t responding the way the architects of deregulation expected. The market doesn’t care if your AC isn’t running in August.

But deregulation didn't just cost Texans money. Steffly goes on to describe how the break-up of electricity monopolies—a major part of the deregulation process—created a far more complicated system for the state to oversee. It also failed to provide incentives for building backup plants to be used during times of peak usage. Both of those are major contributors to the current spate of blackouts that are happening across the state.

What we are witnessing in Texas is yet another example of how the Republican agenda has always been built on lies. Deregulation doesn't unleash the power of competition and reduce costs. Much like their tax cuts, those who benefit are the wealthy, while the rest of us pay the price.