For Decades, the GOP Has Been the Party of Voter Suppression 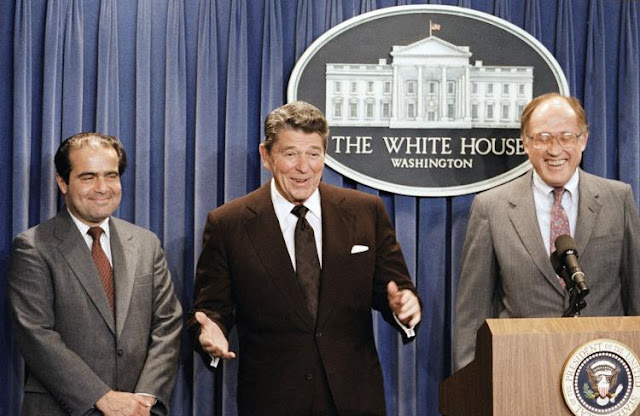 Speaking to a gathering of religious conservatives just prior to the 1980 presidential election, Paul Weyrich—who has been referred to as the founding father of the conservative movement—said the quiet parts out loud.

Weyrich was actually telling the truth when he said that, in this country's history, elections have never been won my a majority of people. Extending the franchise to women and people of color has been a long, hard struggle. Weyrich was also right when he suggested that, when it comes to Republicans, "our leverage in elections goes up as the voting populace goes down."
That is why, for at least four decades, the GOP has been the party of voter suppression. It didn't start with Trump's claims about voter fraud in the 2016 election or the "Big Lie" about the 2020 election being stolen from him.
For example, President Nixon nominated William Rehnquist to the Supreme Court. During his confirmation hearings, questions arose about his political efforts in Arizona.

From 1960 to 1964, Rehnquist directed “ballot security” operations for the Republican Party in Phoenix, known as “Operation Eagle Eye,” which was designed to challenge the eligibility of Democratic voters at the polls.

Rehnquist went on to vote against efforts to enhance voting rights and was eventually nominated to be Chief Justice of the Supreme Court by President Reagan. To fill the opening created by that promotion, Reagan nominated Antonin Scalia, who argued vigorously against the Voting Rights Act, suggesting that it amounted to a "racial entitlement."

Reagan also put William Bradford Reynolds, who had spent most of his career in commercial litigation, in charge of DOJ's Civil Rights Division. Reynolds believed that “government-imposed discrimination” had created “a kind of racial spoils system in America” favoring historically disadvantaged minorities over whites. Obviously, he didn't have much interest in protecting the voting rights of those racial minorities.

George W. Bush's nominees to the Supreme Court were Chief Justice John Roberts (who clerked for Rehnquist and worked for Reynolds) and Samuel Alito—both of whom voted to gut Section 5 of the Voting Rights Act in Shelby County v. Holder. But perhaps even more importantly, it was during the Bush presidency that the work of the Voting Section of the Civil Rights Division was literally turned on its head. Here is what Joseph Rich, head of the section from 1999 to 2005 wrote about that.

From 2001 to 2006, no voting discrimination cases were brought on behalf of African American or Native American voters. U.S. attorneys were told instead to give priority to voter fraud cases, which, when coupled with the strong support for voter ID laws, indicated an intent to depress voter turnout in minority and poor communities.

In other words, the unit that was tasked with enforcing the Voting Rights Act was literally transformed into an effort to depress voter turnout.

That is why it should come as no surprise that voter suppression continues to be a central focus for the Republican Party. As Amy Gardner reports, "GOP state lawmakers across the country have proposed a flurry of voting restrictions." Those efforts will likely be funded by the dark money Leonard Leo is amassing for co-called "conservative causes." Kelly Loeffler, the billionaire who lost the Georgia Senate runoff election to Raphael Warnock, has promised to ramp up voter suppression efforts in her state. As Greg Bluestein reports, she "aims to push conservative electoral policies as state lawmakers weigh a range of new voting restrictions after the GOP defeats."

None of this is new for the Republican Party. It's merely becoming more desperate. While they fail to put forward an agenda other than white grievance, the GOP will try to maintain power by doing everything they can to stop the opposition from voting. Jim Sciutto is right when he says that "voting restrictions will be the story of the 2022 election and beyond."

Democrats have several huge issues on their plates: the pandemic and its effect on the economy, climate change, immigration reform, infrastructure, etc. But in order to address those challenges in the long term, nothing is more important than the electoral and voting reforms included in the For the People Act. Securing our democracy via the protection of voting rights has to be a major priority.