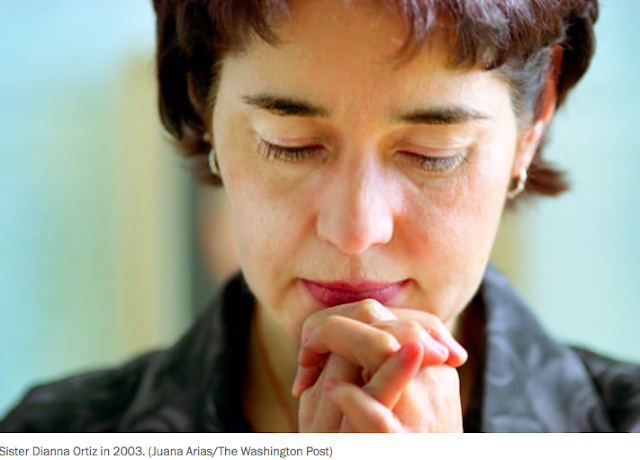 I went to bed with a heavy heart last night after learning that Sister Dianna Ortiz died on Friday from cancer at the age of 62. Her story is one that every American should know.

In 1987, at the age of 29, Ortiz went to a remote village in the Guatemalan highlands to teach Mayan children to read. Two years later, she was abducted by police officers who took her to a secret prison at a police academy in Guatemala City where she was repeatedly gang-raped and brutally tortured. You can read Ortiz's account of what happened here, but be warned, it is more horrific than you can imagine.

Unlike the thousands of Guatemalans that "disappeared" back then, Ortiz lived to tell her story.

As a U.S. citizen, I had another advantage: I could, in relative safety, reveal afterwards the details of what happened to me in those twenty-four hours. One of those details: an American was in charge of my torturers.

I remember the moment he removed my blindfold. I asked him, "Are you an American?" In poor Spanish and with a heavy American accent, he answered me with a question: "Why do you want to know?" Moments before, after the torturers had blindfolded me again and were getting ready to rape me again, they had called out in Spanish: "Hey, Alejandro, come and have some fun!"

And a voice had responded "Shit!" in perfect American English with no trace of an accent. It was the voice of the tall, fair-skinned man beside me. After swearing, he’d switched to a halting Spanish. "Idiots!" he said. "She’s a North American nun." He added that my disappearance had been made public, and he ran them out of the room.

Ortiz was never able to prove that the man in charge of her torturers was an American. But from what we know about U.S. history in Guatemala, her story is plausible.

We have to go back to 1951, when Jacobo Arbenz became the second democratically elected president of Guatemala. He initiated land reforms which granted property to landless peasants. That didn't sit well with the United Fruit Company, which had close ties to Eisenhower's White House. Under the guise of fighting communism, the United States planned and funded a coup, installing Carlos Castillo Armas as the military dictator. He was followed by a series of right-wing military dictators backed by the U.S., setting up a civil war in Guatemala that lasted from 1960 to 1996. The results were horrific.

With the 1996 signing of a peace accord between the Guatemalan military and leftist guerrillas, the Latin American Cold War finally came to an end – in the same place it had begun – making Guatemala’s the longest and most lethal of the hemisphere’s civil wars. Some 200,000 men, women and children were dead, virtually all at the hands of the military: more than were killed in Argentina, Uruguay, Chile, Brazil, Nicaragua and El Salvador combined.

One of those dictators was Gen. Efraín Ríos Montt. In 2013, a Guatemalan court found him guilty of genocide and crimes against humanity. Here is how Corey Robin described what was going on in 1982.

On 5 December 1982, Ronald Reagan met the Guatemalan president, Efraín Ríos Montt, in Honduras. It was a useful meeting for Reagan. ‘Well, I learned a lot,’ he told reporters on Air Force One. ‘You’d be surprised. They’re all individual countries.’ It was also a useful meeting for Ríos Montt. Reagan declared him ‘a man of great personal integrity . . . totally dedicated to democracy’, and claimed that the Guatemalan strongman was getting ‘a bum rap’ from human rights organisations for his military’s campaign against leftist guerrillas. The next day, one of Guatemala’s elite platoons entered a jungle village called Las Dos Erres and killed 162 of its inhabitants, 67 of them children. Soldiers grabbed babies and toddlers by their legs, swung them in the air, and smashed their heads against a wall. Older children and adults were forced to kneel at the edge of a well, where a single blow from a sledgehammer sent them plummeting below. The platoon then raped a selection of women and girls it had saved for last, pummelling their stomachs in order to force the pregnant among them to miscarry. They tossed the women into the well and filled it with dirt, burying an unlucky few alive. The only traces of the bodies later visitors would find were blood on the walls and placentas and umbilical cords on the ground.

That is why, when I read that Rep. Jamie Raskin was giving speeches to denounce Reagan's involvement in Latin America while he was a student at Harvard, I knew that his roots as a progressive ran deep. But Reagan wasn't just slapping Montt on the back and calling him a good guy, he was sending millions of dollars to Guatemala to support the military that was committing these atrocities. But thanks to Sister Dianna Ortiz, we know it was much worse than that. Here's how she describes part of her ongoing search for justice.

In 1996, I held a five-week vigil before the White House, asking for the declassification of all U.S. government documents related to human rights abuses in Guatemala since 1954, including documents on my own case. A few days into my vigil, I was granted a meeting with First Lady Hillary Clinton. Mrs. Clinton admitted what no other U.S. government official had dared to concede during my seven-year search for the truth behind my abduction and torture in Guatemala: she said it was possible that the American in charge of my Guatemalan torturers was a "past or present employee of a U.S. agency."

One of the most significant, but unheralded accomplishments of the Clinton administration was the declassification of thousands of documents related to the involvement of the CIA and military intelligence in Latin America during the Cold War. Here's some of what we learned:

Used in courses at the U.S. Army’s School of the Americas, the manual says that to recruit and control informants, counterintelligence agents could use “fear, payment of bounties for enemy dead, beatings, false imprisonment, executions and the use of truth serum,” according to a secret Defense Department summary of the manuals compiled during a 1992 investigation of the instructional material and also released yesterday.

The Army School of the Americas, long located in Panama by moved in 1984 to Fort Benning, Ga., has trained nearly 60,000 military and police officers from Latin America and the United States since 1946.

Its graduates have included some of the region’s most notorious human rights abusers, among them Roberto D’Aubuisson, the leader of El Salvador’s right-wing death squads; 19 Salvadoran soldiers linked to the 1989 assassination of six Jesuit priests; Gen. Manuel Antonio Noriega, the deposed Panamanian strongman; six Peruvian officers linked to killings of students and a professor; and Col. Julio Roberto Alpirez, a Guatemalan officer implicated in the death of an American innkeeper living in Guatemala and to the death of a leftist guerrilla married to an American lawyer.

Years later it was Yale history professor Greg Grandin who connected the dots between George W. Bush's "war on terror" and these activities in Latin America.

In fact, it was in Latin America that the CIA and U.S. military intelligence agents, working closely with local allies, first helped put into place the unholy trinity of government-sponsored terrorism now on display in Iraq and elsewhere: death squads, disappearances and torture.

It's also worth noting that the torture of Sister Ortiz happened on George H.W. Bush's watch, the president who had previously served as CIA director. Here's how she described the response of the U.S. embassy in Guatemala at the time.

Only one week after my abduction, before any true investigation had been conducted, the U.S. ambassador suggested that I was a political strategist and had staged my own kidnapping to secure a cutoff of U.S. military aid to Guatemala.

Two months later, after a U.S. doctor had counted 111 cigarette burns on my back alone, the story changed. In January 1990, the Guatemalan defense minister publicly announced that I was a lesbian and had staged my abduction to cover up a tryst. The minister of the interior echoed this statement and then said he had heard it first from the U.S. embassy. According to a congressional aide, the political affairs officer at the U.S. embassy, Lew Anselem, was indeed spreading the same rumor.

In the presence of Ambassador Thomas Stroock, this same human rights officer told a delegation of religious men and women concerned about my case that he was "tired of these lesbian nuns coming down to Guatemala." The story would undergo other permutations. According to the Guatemalan press, the ambassador came up with another version: he told the Guatemalan defense minister that I was not abducted and tortured but simply "had problems with [my] nerves."

Ortiz spent the rest of her life not only seeking justice, but working with other victims of torture to find a modicum of healing. I've watched a few videos of her telling this story and her pain in relating these events years later remained absolutely palpable.

That is why I love the picture of her up above. Looking at it I can imagine that, perhaps in her death, Sister Dianna might have finally found some peace. At least...that is my hope.