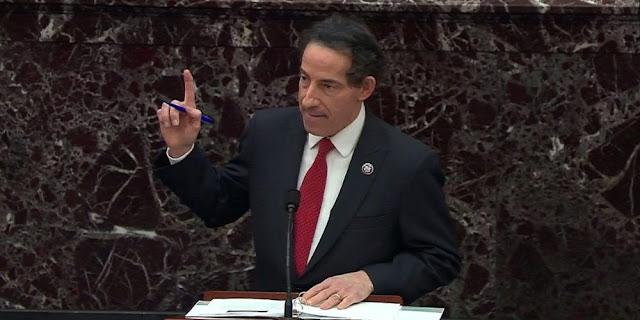 I hadn't heard of Rep. Jamie Raskin (D-MD) until his son committed suicide and he and his wife wrote a heart-wrenching editorial about their son. Eight days later, Speaker Nancy Pelosi named Raskin to be the lead impeachment manager for the Senate trial of Donald Trump.

We've all watched Raskin and his associates do a magnificent job of documenting why the former president should be found guilty of inciting the riot that took place on January 6. As a result, a lot of us are learning about a man who is one of the most progressive Democrats in the House.

Raskin comes from a long line of progressive Democrats. His grandfather, Samuel Bellman, was Minnesota’s first Jewish state legislator, elected in 1935. His father, Marcus Raskin, was a young aide in the John F. Kennedy White House, but left to form the Institute for Policy Studies over his objections to the war in Vietnam. In 1971, Marcus Raskin received the Pentagon Papers from Daniel Ellsberg and put him in touch with New York Times reporter Neil Sheehan.

Bill McKibben writes that the first time he met Jamie Raskin was when the two of them were students at Harvard. Raskin had just given a rousing speech against the Reagan Administration’s involvement in Central America. Today's liberals have all but forgotten that, under the cover of fighting the so-called "Cold War," the U.S. engaged in both committing and supporting atrocities all over Central and South America. Fighting against that was a central focus for progressives back in those days.

As many of us have learned during the Senate impeachment trial, Raskin taught constitutional law at  American University Washington College of Law for over 25 years. One of his students was Stacey Plaskett, who has done an outstanding job as one of the House managers of the impeachment trial.

In 2006, Raskin was elected to the Maryland state senate, where he fought to repeal the death penalty, sponsored the first bill in the country for the National Popular Vote, championed efforts to reform marijuana laws, and helped lead the fight to legalize same-sex marriage in Maryland. During a committee hearing on marriage equality, Raskin responded to an opposing lawmaker with one of his most famous quotes: "Senator, when you took your oath of office, you placed your hand on the Bible and swore to uphold the Constitution. You did not place your hand on the Constitution and swear to uphold the Bible."

Raskin was diagnosed and treated for colon cancer in 2010. He said that the experience taught him the difference between misfortune and injustice.

“Any of us could be assigned such a verdict on any particular day,” he said. “If you experience such a misfortune and you get such a diagnosis and you can’t get health care, because you love the wrong person or you lost your job or you’re not working or you’re too poor, that’s not a misfortune, that’s an injustice because we can do something about that.”

In 2016, Raskin was elected to represent Maryland's 9th congressional district. Here is an example of the platform he proposed.

A longtime resident of ultra-progressive Takoma Park, Raskin has proposed a national commission to develop legislation “to liberate the American underclass from the interlocking problems of inadequate education and bad health care, environmental racism, unemployment, economic exploitation, and mass incarceration.”

Once elected to Congress, Raskin joined three other Democrats (Jared Huffman, Jerry McNerney, and Dan Kildee) to form the Freethought Caucus, with the goal of "pushing public policy formed on the basis of reason, science, and moral values," promoting the "separation of church and state."

During a 2018 interview with the Guardian, Raskin explained why he wasn't interested in moving to the center in order to advance his political career.

Sen. James Brochin of Baltimore County, one of the Maryland Senate’s most right-leaning Democrats, said Raskin’s “gentle and persistent” advocacy got him to change his position on same-sex marriage.

“He spent two years working on me,” Brochin said. “He’s got an incredible amount of decency.”

I am not particularly fond of political labels, but nevertheless, tend to refer to myself as a pragmatic progressive. For me, that has always meant grounding policy proposals in reason, science, and morality—or doing what's right, the best we can. That is why I'm proud to be a member of a party that elects people like Jamie Raskin.

When we talk about progressives these days, it is often in reference to elected officials like Bernie Sanders, Elizabeth Warren, and Alexandria Ocasio-Cortez. But behind the scenes are people like Jamie Raskin, who don't typically garner as much media attention. That's why I'd like to send out a special "thank you" to Speaker Nancy Pelosi for choosing him to be the lead House impeachment manager—giving us the opportunity to learn more about one of the outstanding members of our party. Raskin's moral clarity is at the center of what it means to be progressive.