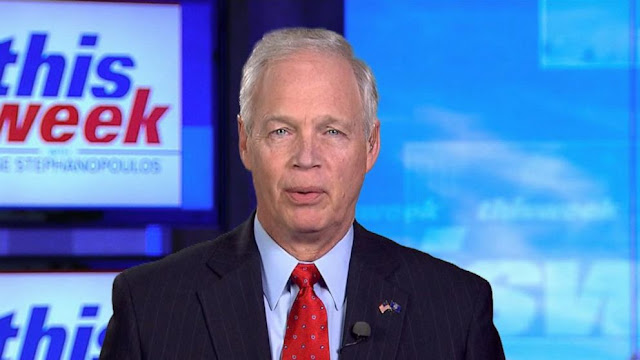 Senator Ron Johnson (R-WI) has come under fire recently for saying that the insurrectionist mob that stormed the Capitol on January 6th didn't scare him, but he would have been scared if the rioters were Black Lives Matter or antifa protesters. Of course, that is a blatantly racist statement.

That incident led Trip Gabriel and Reid Epstein to review Johnson's past, demonstrating that the senator has a long history of "assaulting the truth." In their exposé, they noted many instances of Johnson engaging in disinformation. But they left out a few. So here's a definitive list of the conspiracy theories promoted by Johnson - starting from the most recent and going back to his first campaign in 2010.

In summary, it's clear that long before Trump was elected president, Senator Johnson never met a right-wing conspiracy theory that he failed to embrace.
Johnson first ran for his senate seat in 2010 as a businessman who was new to politics. At the time, he was CEO of a plastics company started by his wife's family, funneling $9 million of his own money into a tea party-inspired campaign. But at the time, Jim VandeHei captured the essence of Johnson's political philosophy in reporting that the candidate was aiming to be a "messenger" rather than a "legislator."

If Johnson and others like him win, they seem less interested in plunging into specific legislation and more inclined to wage a philosophical messaging war to change the GOP and the nature of governance. Asked what innovative ideas he might push in office, Johnson didn't talk of tax reform or private Social Security accounts, or of anything a conventional senator might do. Instead, he committed himself to a "re-education of America."

In that way, Johnson was a bit ahead of his time in a party that is now more invested in "owning the libs" than actually governing.

To “own the libs” does not require victory so much as a commitment to infuriating, flummoxing or otherwise distressing liberals with one’s awesomely uncompromising conservatism. And its pop-cultural roots and clipped snarkiness are perfectly aligned with a party that sees pouring fuel on the culture wars’ fire as its best shot at surviving an era of Democratic control.

As is often the case, GOP claims that "libs" plan to set up "re-education camps" to deprogram Republican Trump supporters is simply another case of projection. Senator Johnson was clear from the get-go that his plan was to "re-educate America" by promoting conspiracy theories. Whether or not he actually believes the nonsense he spouts is open for speculation.