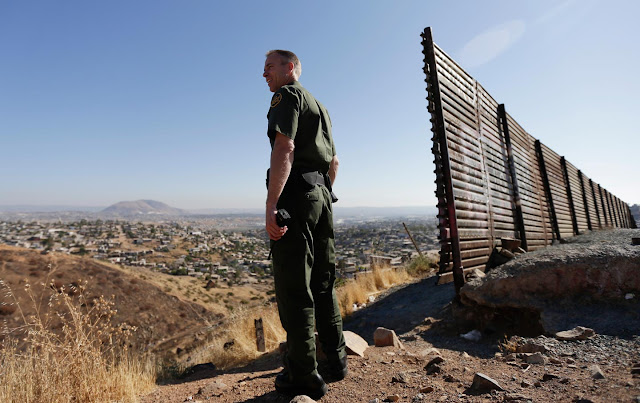 The wonks at Washington Post's Monkey Cage blog have looked at the numbers and come to the same conclusion I did about what is happening on our southern border: it is not a "crisis" created by the Biden administration's policies. While it's true that there is currently a surge of migrants being apprehended, they found two reasons to explain the situation.

First of all, they note the seasonal nature of migration.

[T]he CBP’s numbers reveal that undocumented immigration is seasonal, shifting upward this time of year. During fiscal year 2019, under the Trump administration, total apprehensions increased 31 percent during the same period, a bigger jump than we’re seeing now...migrants start coming when winter ends and the weather gets a bit warmer...[they] stop coming in the hotter summer months when the desert is deadly. That means we should expect decreases from May to June and June to July.

To demonstrate this seasonal pattern, here is a graph of border apprehensions per month dating back to 2000 from Reuters.

As you can see, regardless of the level of migration, there are seasonal peaks almost every year. One of the exceptions happened in 2020.

2020 was the pandemic, when movement dropped dramatically. Countries around the world closed their borders. Here in the United States, the Trump administration invoked Title 42, a provision from the 1944 Public Health Act, to summarily expel migrants attempting to enter the United States without proper documentation.

That led to the second reason we're seeing increased numbers in 2021.

[I]n fiscal year 2021, it appears that migrants are continuing to enter the United States in the same numbers as in fiscal year 2019 — plus the pent-up demand from people who would have come in fiscal year 2020, but for the pandemic...This suggests that Title 42 expulsions delayed prospective migrants rather than deterred them — and they’re arriving now.

That would be consistent with nearly three decades of research in political science...Scholars consistently find that border security policies do not necessarily deter migration; rather, they delay migrants’ decisions to travel, and change the routes they take.

So have Biden administration policies caused a crisis at the southern border? Evidence suggests not. The Trump administration oversaw a record in apprehensions in fiscal year 2019, before the pandemic shut the border. This year looks like the usual seasonal increase plus migrants who would have come last year, but could not.

Nevertheless, it is not just Republicans who are stirring up a panic about what's happening. Both television networks and cable news gave the "crisis" saturation coverage on Sunday and Monday. Here's Chuck Todd's entry on Meet the Press.

It's fair to call the deteriorating situation at the US-Mexican border a crisis — even if the Biden administration refuses to use that word.

But it's more than that: It's a political crisis for the new president, with no easy way out. pic.twitter.com/7mHiB8FbCl

Todd starts off by suggesting that it's fair to call the "deteriorating situation" on our southern border a "crisis." He then launches into a couple of renditions of bothersiderism before bizarrely referring to an intelligence report about domestic terror groups (read: white nationalists). That is nothing short of abominable reporting.

As all of this unfolds, I have been reminded of the panic the media induced in 2014 about Ebola in the run-up to the 2014 midterms. They are proving once again that they are still suckers for Republican fear-mongering. Of course, the situation is even worse on Fox News and other right wing media outlets. But too many mainstream outlets are complicit as well.