Who Is the 'Radical Partisan Culture Warrior,' John Cornyn or Vanita Gupta? 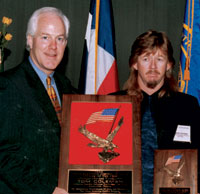 In July 2002, Bob Herbert told the story of what had happened in Tulia, Texas.

On the morning of July 23, 1999, law enforcement officers fanned out and arrested more than 10 percent of Tulia's tiny African-American population. Also arrested were a handful of whites who had relationships with blacks.

The humiliating roundup was intensely covered by the local media, which had been tipped off in advance. Men and women, bewildered and unkempt, were paraded before TV cameras and featured prominently on the evening news. They were drug traffickers, one and all, said the sheriff, a not particularly bright Tulia bulb named Larry Stewart.

Among the 46 so-called traffickers were a pig farmer, a forklift operator and a number of ordinary young women with children.

If these were major cocaine dealers, as alleged, they were among the oddest in the U.S. None of them had any money to speak of. And when they were arrested, they didn't have any cocaine. No drugs, money or weapons were recovered during the surprise roundup...

The entire operation was the work of a single police officer who claimed to have conducted an 18-month undercover operation. The arrests were made solely on the word of this officer, Tom Coleman, a white man with a wretched work history, who routinely referred to black people as ''niggers'' and who frequently found himself in trouble with the law...

Mr. Coleman's alleged undercover operation was ridiculous. There were no other police officers to corroborate his activities. He did not wear a wire or conduct any video surveillance. And he did not keep detailed records of his alleged drug buys. He said he sometimes wrote such important information as the names of suspects and the dates of transactions on his leg.

Nevertheless, Coleman’s testimony produced 38 wrongful convictions — almost all Black residents — by all-white or mostly white juries, and condemned the convicted to a collective 750 years in prison.

The day after the raid in 1999, the Tulia Herald cheered it with the headline, "Tulia's Streets Cleared of Garbage." But here's where this horrific story gains relevance for today. At the time, John Cornyn was serving as the Texas state attorney general. He was obviously aware of what happened in Tulia and named Tom Coleman "Lawman of the Year."

The decision to do that might have come back to haunt a man of conscience. That's because a young lawyer with the NAACP Legal Defense and Education Fund took on the job of appealing the Tulia convictions as her first case after graduating from law school. Here name is Vanita Gupta—the woman Biden has nominated to be associate attorney general.

As evidence began to mount that the entire operation in Tulia was a sham, Gupta was one of a growing number of people who called on Cornyn to open an investigation into what happened. He dragged his feet until it became politically expedient to do something.

It was not until late August 2002 — more than three years after the initial arrests — that Cornyn opened an investigation into the drug sting. He did so as he faced embattled criticism for inaction on the matter, and as he was mounting a bid for an open U.S. Senate seat against Ron Kirk, the Black Democratic mayor of Dallas.

Other than running against Kirk for an open Senate seat, Cornyn was finally spurred to act because the events in Tulia were gaining national attention due to the fact that Bob Herbert, who was then an opinion columnist for the New York Times, began working with Gupta to write about them. The excerpt above came from the first one he published. After visiting Tulia himself, Herbert went on to write 5 more columns about Tulia—all published in August 2002.

'Lawman of the Year'

All of a sudden, the Texas media that had been asleep at the wheel for three years roared awake-while it had just one or two years before heralded the Tulia drug bust as a big Texas victory, it now covered the story as an injustice that had an entire community of color on lockdown...The story was not anymore about a large number of individual drug dealers being caught by wily law enforcement. Texas reporters swarmed the story and the politicians responsible.

By then, the irony of what was actually happening in Tulia was on full display.

In June 2000...a white teenager in Tulia told authorities that an older man had offered him cocaine in exchange for sex. The accusation became a jaw-dropper when the boy revealed the man’s name: It was Charles Sturgess, one of the owners of the Tulia Livestock Auction. Tulia is built around that cattle auction, and Sturgess was one of the biggest wheels in town. Sheriff Stewart, who went to church with the Sturgess family and bought cows from Charles, asked the local Texas Ranger to conduct the investigation. The Ranger wired the boy and sent him back out to meet with Sturgess, who made the same proposition once again as they cruised slowly through a pasture that night in his truck. The Ranger swept in and arrested Sturgess, but the most important revelation was yet to come: A search of the truck yielded three and a half ounces of powdered cocaine. In one single bust of a prominent white man—and a completely fortuitous one at that—many times more cocaine had been seized than in any single buy during Coleman’s entire eighteen-month undercover operation.

That much cocaine is more than one person can use. How many kids did Sturgess give cocaine to? Tulia will never know the answer to that question. A few months after he bailed himself out of jail, Sturgess drove his truck out to a piece of deserted ranch property and shot himself dead.

The Tulia defendants targeted by Coleman were eventually exonerated, thanks to the work of people like Vanita Gupta (you can read her account of the process here). But as I've noted previously, her nomination to be associate attorney general is coming under attack by dark money groups like the Judicial Crisis Network. When the Judiciary Committee held hearings on Gupta's nomination, the senator who had supported George Wallace's 1968 presidential bid, named Coleman 'Lawman of the Year' and, in the wake of George Floyd's murder, denied the existence of systemic racism, had the nerve to accuse Gupta of being a "radical partisan culture warrior."

Of course, Senate hearings on presidential nominees are always a one-way street. Cornyn can cherry-pick which events to focus on, while throwing out ridiculous accusations. The nominee must be deferential and isn't allowed to make any accusations in return. I can't help but wonder what Cornyn would say if the positions were reversed and Gupta was allowed to question Cornyn about why he had named an obviously racist corrupt cop "Lawman of the Year." Did he actually review the record, or was he simply celebrating that Coleman had "cleaned up the garbage on Tulia's streets?"

When it comes to Gupta, she's the one who defended innocent people that had been targeted for abuse by racist law enforcement. That's the kind of thing she's been doing her entire career. It's a record anyone would be proud to defend.