Prosecutors in the Chauvin Trial Have Made a Very Strong Case 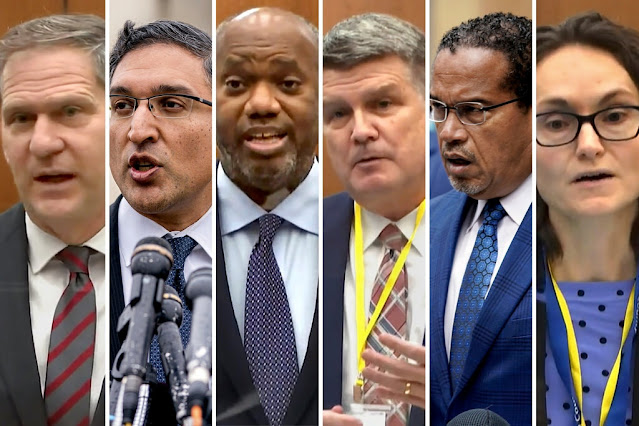 I've been keeping an eye on Derek Chauvin's trial over the last few days. I keep telling myself that we shouldn't jump to any conclusions yet because, at this point, the prosecution is still presenting their case. Things could change next week when the defense begins to call their witnesses.

But so far, it is hard to envision how a jury would conclude anything other than Chauvin is guilty of at least second degree murder. Here is some of the evidence that stood out to me.

1. One of the criteria for justifying the use of force against a suspect is the severity of the crime. George Floyd was in the process of being charged with passing a counterfeit $20 bill - a minor nonviolent felony. According to testimony from Minneapolis Police Chief Medaria Arradondo, officers are trained to detain a suspect only in the case of a violent felony. In other words, the entire incident with Floyd was outside department policy from the get-go.

2.  Once a suspect is in police custody, the officers involved have a "duty of care" that requires them to provide basic medical care. According to videos presented at the trial, at one point another police officer told Chauvin that Floyd had no pulse. Rather than attempt CPR or chest compressions, Chauvin continued to keep Floyd in the prone position with a knee on his neck for an additional 2 1/2 minutes.

3. Multiple police officers, including Chief Arradondo, stated that Chauvin didn't follow police department policies when he held Floyd in the prone position after he was handcuffed and ceased to resist.

4. Multiple expert witnesses, including pulmonary specialists and medical examiners, reviewed the evidence in this case and came to the conclusion that the cause of death was asphyxiation due to the actions of the police officers involved. They all disputed defense claims that Floyd's death was the result of his heart condition or drug use.

Of course, all the defense lawyers have to do is convince at least one juror that there is "reasonable doubt" that Chauvin cased the death of George Floyd. But at least at this point, they don't seem to have reached that bar with their cross examination of prosecution witnesses. We'll have to wait and see what they come up with next week.

An indication that perhaps the prosecution has made their case quite successfully is demonstrated by articles published at the Washington Examiner both before and after the trial began. In an column from two weeks ago titled, "Convicting Derek Chauvin of George Floyd's murder won't be easy," Eddie Scarry pointed to the fact that the medical examiner's report showed that Floyd had heart disease and found that he had both methamphetamine and fentanyl in his blood. Scarry also noted that the medical examiner found no injuries on Floyd's neck or throat. All of those issues were dealt with substantively by experts witnesses for the prosecution.

But Scarry also wrote something that amounts to a lie of omission. He claimed that the medical examiner said that Floyd wasn't suffocated, "his heart simply gave out." Here is the testimony of Dr. Andrew Baker, Hennepin County Medical Examiner, about the conclusions he reached in his autopsy report.

Baker ruled Floyd's death a homicide. He listed the cause of death as "cardiopulmonary arrest" (a fancy way of saying his heart and lungs stopped) brought on by law enforcement subdual, restraint, and neck compression.  Baker made it clear that Floyd's heart disease and drug use were "complicating factors," but not the cause of death.
In an editorial published Friday titled, "Only Derek Chauvin is on trial—not our justice system and not the police," writers at the Washington Examiner took a totally different tone.

What exactly is on trial in Minneapolis right now?

Rather, the trial is of a former police officer, Derek Chauvin. And he is on trial not for his character or his aptitude as a police officer but for the specific, infamous, filmed arrest that ended with George Floyd’s death...

If the jury decides Chauvin caused Floyd’s death, it should rule accordingly. It should not rule based on any hyped-up media narrative about police shootings.

The entire article reads like a pre-emptive strike against using a guilty verdict as a call for police reforms. In other words, the editorial staff at the Washington Examiner is telegraphing what they think the outcome of this trial will be and preparing their next argument. Take that for what it's worth. But a guilty verdict would be a historic milestone for justice.