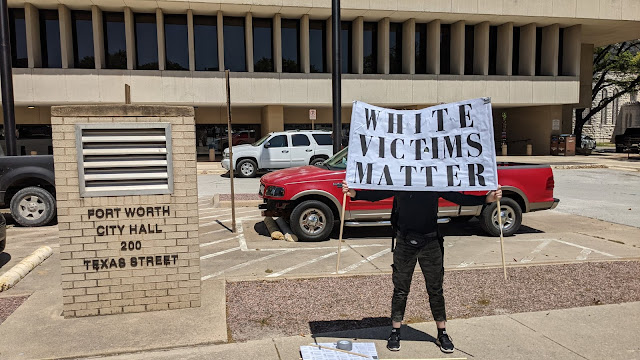 The insurrection that took place on January 6th was perhaps the biggest news event of the year. On the other hand, most journalists aren't prepared to cover a story that didn't happen. But that's the news that caught my eye yesterday. As we are subjected to warnings about the next American insurgency, everyone was geared up for "White Lives Matter" protests all over the country. But they were a total flop.

In semi-private, encrypted chats, neo-Nazis and other far-right extremists planned rallies in dozens of cities Sunday to promote their racist movements and spread their ideologies to larger audiences.

Hyped by organizers as events that would make “the whole world tremble,” the rallies ran into a major problem: Hardly anyone showed up.

The “White Lives Matter” rallies, the first major real-world organizing efforts by white supremacists since 2018, were planned on the encrypted app Telegram after many aligned groups were alleged to have taken part in the Jan. 6 storming of the U.S Capitol.

Only a small counter protest is present at NYC White Lives Matter rally that was ment to be held outside Trump Tower at 1pm today pic.twitter.com/AiA4TchsXY

So what happened? The federal government is in the process of prosecuting 369 insurrectionists that stormed the Capitol on January 6th. In addition, the groups planning Sunday's events were infiltrated and disrupted.

The “White Lives Matter” rallies were disrupted in several cities after activists infiltrated their online groups and leaked internal chats to journalists. Those chats were reported to have indicated that the events were being planned by the extremist group the Proud Boysand by self-described fascists and Nazis who framed the rallies as peaceful events unaffiliated with known hate groups to recruit more mainstream members.

Organizers in several cities canceled events because of sabotage by antifa activists. Raleigh’s organizer called off a rally Friday, telling subscribers, “It turns out that the 11th is a disaster.”

Two of the largest Telegram channels dedicated to events in Philadelphia and New York City were shown to be traps created by anti-fascist activists. Another local activist tweeted screenshots of the plan's reveal with a warning Saturday to would-be rallygoers: “Given how riddled these chats are with antifascists ... it might be time to rethink whether you really want to trust a bunch of anonymous internet weirdos to show up with you in your city."

That's what I call "effective activism."

None of this means that these violent right-wing groups no longer pose a threat. Brian Levin, director of the Center for the Study of Hate & Extremism at California State University, San Bernardino says that the risk now can be found in “loners and cells, who act on their own combination of hatreds and idiosyncrasies often cobbled together from a constant all-you-can-eat buffet of stereotyping and conspiracies that still populate online discourse.”

But it is important to know what's working to silence these efforts and avoid the kind of panic that is exactly what these terrorists hope to instill. That's the big story from Sunday!