The Choctaw Tribe's Gift of Hope 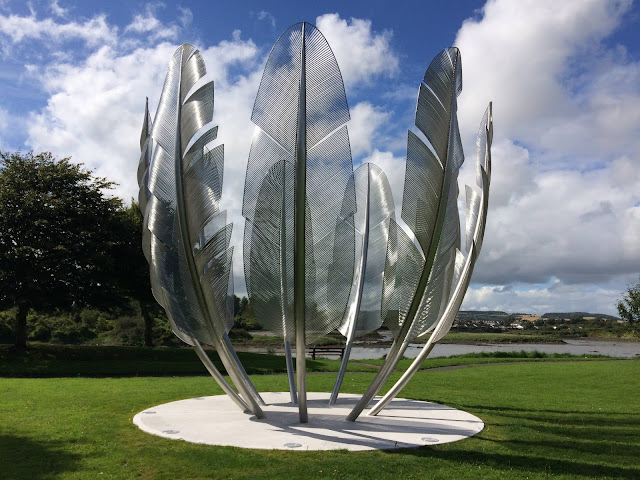 I often think about a Lily Tomlin line from The Search for Signs of Intelligent Life in the Universe, written by Jane Wagner: "No matter how cynical you become, it's never enough to keep up." These days, it is difficult to imagine how we can be anything but cynical...and it never seems to be enough to keep up.

But then, something like the story I'm about to tell breaks through. It is definitely not one any of us learned about in our history classes. Here is how it was told by a descendent of one of the recipients.

Of all the devastations to befall Ireland, few have been as harrowing as the Great Potato Famine. Striking in the fall of 1845 and lasting for almost six years, an Gorta Mór left over one million Irish dead as a result of starvation, exposure and disease. When the emaciated peasants looked to their colonial masters for support, the British minister for famine relief responded that the events were, “a mechanism for reducing surplus population… the selfish, perverse and turbulent character of [Irish] people.”...The fact that it had been British policy to constrain the Irish to tiny plots of barren land suitable only for growing basic tubers was conveniently forgotten. When famine hit, the Irish would starve. It was an inevitability brought on by nature but predetermined by acts of man.

Within such a hostile environment, the Irish felt that they had few friends. And yet, 4,000 miles away, the news of the ruin in Ireland had reached the people of the Choctaw Nation. The Choctaw, too, were familiar with how society hemorrhages in the face of tyrannical governance, and in the Irish they saw shadows of their own past. Only fifteen years before, the Choctaw had been the victims of a forced march from their homelands, a wretched exodus that they call the Trail of Tears. But the long march from Mississippi to Oklahoma had made the Choctaw acutely sensitive to the anguish of those desperately in need, and when news arrived of what was happening in Ireland, a group of concerned tribal members promptly rallied together to raise funds for those Irish still clinging on to life.

“We helped the Irish because that’s who we are and what we are,” explains tribal council speaker, Delton Cox, “we remembered the sorrow to befall our people, and we felt the same for the people in Ireland. $170 might not seem like much, we were poor, yet each of us eagerly gave to help our brothers and sisters.”

In that story, we not only see man's inhumanity in consigning the Irish to death and the Choctaw to the Trail of Tears, we see an amazing example of the empathy human beings are capable of extending—even to strangers that are 4,000 miles away. We tend to find the latter more unusual. But is that because humans are more capable of inhumanity than empathy? Or is it because we nurture one more than the other?

The story, however, doesn't end in the mid-1800s. In the summer of 2017, the Irish town of Midleton dedicated the Kindred Spirits monument to the Choctaw Tribe that is pictured above. It was their way of memorializing the generosity of spirit that had been displayed over 170 years ago. 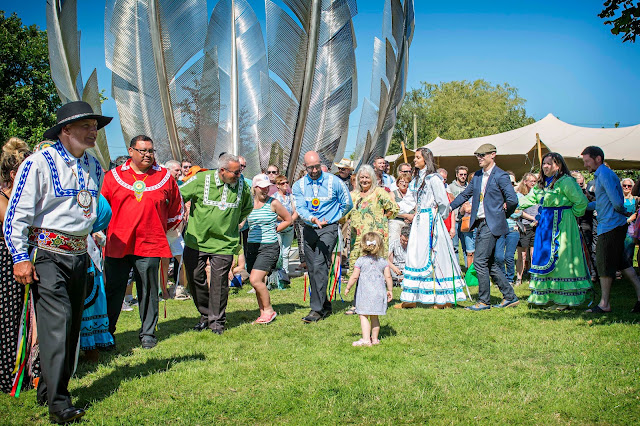 The sculpture by Alex Pentek is located in Bailick Park, Midleton, in Cork County. It features nine stainless steel eagle feathers placed in the shape of a bowl.

Then last year, the people Ireland decided it was time to pay it forward.

[H]undreds of Irish people are repaying that old kindness, giving to a charity drive for two Native American tribes suffering in the Covid-19 pandemic. As of Tuesday, the fund-raiser has raised more than $1.8 million to help supply clean water, food and health supplies to people in the Navajo Nation and the Hopi Reservation, with hundreds of thousands of dollars coming from Irish donors, according to the organizers...

“I’d already known what the Choctaw did in the famine, so short a time after they’d been through the Trail of Tears,” Sean Callahan, 43, an Apple administrator in Cork City who made a donation, said on Tuesday. “It always struck me for its kindness and generosity and I see that too in the Irish people. It seemed the right time to try and pay it back in kind.”

Choctaw Chief Gary Batton says that his ancestors knew that their gift of $170 (which would be about $5,000 today) was small, but that it was a "gift of hope." And now, 170 years later, that gift continues to ripple around the globe. Here is how theologian Rubem Alves answered the question, "What is hope?"

It is a hunch that the overwhelming brutality of facts that oppress and repress is not the last word. It is a suspicion that reality is more complex than realism wants us to believe and that the frontiers of the possible are not determined by the limits of the actual...Let us plant dates even though those who plant them will never eat them.

Even in the midst of their own oppression, the Choctaw Tribe planted seeds they would never eat. Today I am more nourished because I have been reminded that, even with all of our faults, human beings are capable of astounding empathy.