How the Biden Administration Will Police the Police 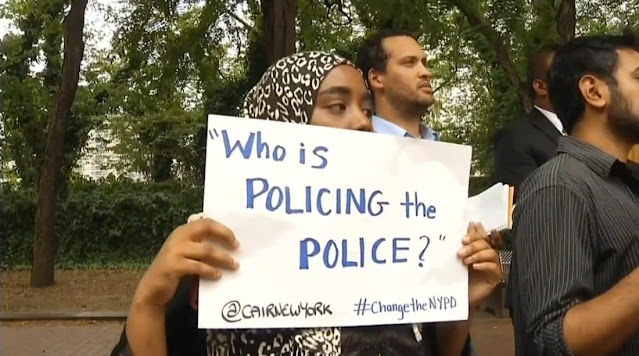 On Wednesday, Attorney General Merrick Garland announced that the Civil Rights Division of the Justice Department has opened an investigation of the Minneapolis Police Department to determine whether they have exhibited a pattern or practice of policing that "deprives persons of rights, privileges, or immunities secured or protected by the Constitution or laws of the United States.”

The authority of the department to conduct such investigations was provided in the 1994 crime bill after the beating of Rodney King by LAPD officers. Here is how it works:

Pattern or practice investigations are civil, not criminal, investigations, and they aim at systemic problems, not individual officers...

In investigations like these, the federal government sends attorneys and investigators to the city to learn as much as it can about the areas of police conduct under scrutiny — such as the use of force, stops and searches, suppression of free speech or all of the above. The team interviews officers and reviews arrest reports, citizen complaints, department policies and training materials. They also hold community forums and interview residents about their interactions with police to gather evidence from across the community. With the help of data scientists and experts with law enforcement backgrounds, they assess whether there is a pattern of unconstitutional conduct and also identify the sources of the systemic misconduct...

During the Obama administration, the Justice Department routinely made its findings public in detailed reports...A findings letter like that, which showed a clear pattern of constitutional violations, would normally tee up a lawsuit where the federal government would seek structural reform.

The negotiation process is hard-fought, but it results in a set of reforms that both sides believe are feasible to implement and strong enough to correct the problems...Once the consent decree is agreed to, the court has the authority to monitor its implementation. If the city doesn’t comply, it can be held in contempt and sanctioned through fines or additional requirements.

During Obama's presidency, the Justice Department opened 25 investigations and reached 15 consent decrees, more than any other administration, thanks to the efforts of Tom Perez and Vanita Gupta, who ran the Civil Rights Division. In January 2017, the division released a report on the use of this tool. 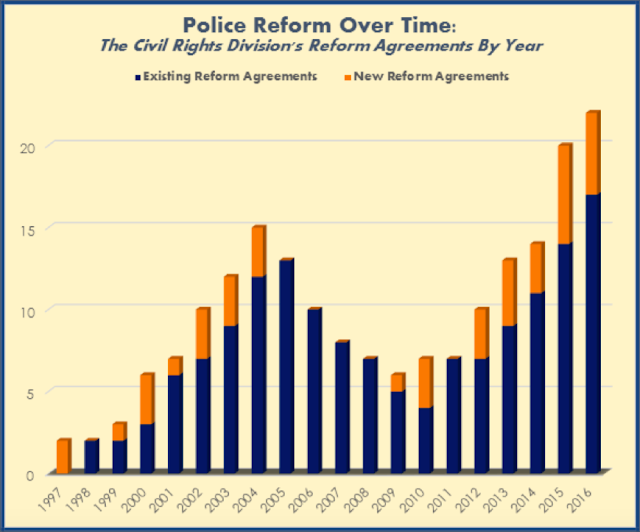 The day before Trump fired him, AG Sessions basically ended the department's oversight of existing consent decrees and stopped opening pattern or practice investigations. So with the announcement last week by Garland, we have yet another example of why elections matter. It is clear that the Biden administration plans to use this tool to tackle the problem of systemic racism in police departments.
While not a magic bullet, it has been demonstrated that this process works. According to one study, departments that went through consent decrees saw an average of 25 percent fewer police shootings in the first year of implementation.
In 2011, the Civil Rights Division opened a pattern or practice investigation into the Newark, NJ Police Department. They released their findings in 2014.

In April 2016, the parties entered into a court-enforced consent decree. Thanks to a commitment from Newark Mayor Ras Baraka and Police Director Anthony Ambrose, the work continued, even as the Trump administration failed to enforce the consent decree. Here are the results:

Newark Police officers did not fire a single shot during the calendar year 2020, and the city didn’t pay a single dime to settle police brutality cases. That’s never happened, at least in the city’s modern history.

At the same time, crime is dropping, and police recovered almost 500 illegal guns from the street during the year.

“This is significant,” says Aqeela Sherills, head of the Newark Community Street Team, a group of mostly former offenders who work to defuse violence in the city’s most violent wards. “It speaks to how reform has really taken hold in the city.”

Larry Hamm, the godfather of police protests in Newark as head of the People’s Organization for Progress, agreed. “Police brutality is still a problem,” he says. “But it’s fair to say the consent decree has had a real impact.”

Much as it did during the Obama administration, this kind of painstaking work by the DOJ's Civil Rights Division will likely fly under the radar during the Biden administration as calls for police reform intensify. But make no mistake, when Republicans attack DOJ nominees like Vanita Gupta and Kristen Clarke, it is at least in part due to their expertise in policing the police.