No, Biden Is Not Reigniting the Cold War With Russia 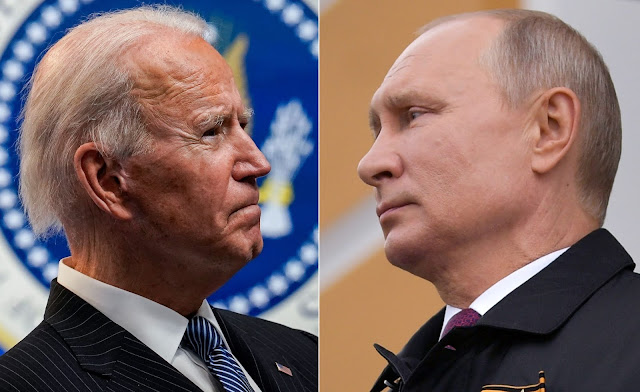 On April 15th, President Biden announced actions he was taking against Russia, including new sanctions and the expulsion of diplomats. Here is how he explained that:

I, JOSEPH R. BIDEN JR., President of the United States of America, find that specified harmful foreign activities of the Government of the Russian Federation — in particular, efforts to undermine the conduct of free and fair democratic elections and democratic institutions in the United States and its allies and partners; to engage in and facilitate malicious cyber-enabled activities against the United States and its allies and partners; to foster and use transnational corruption to influence foreign governments; to pursue extraterritorial activities targeting dissidents or journalists; to undermine security in countries and regions important to United States national security; and to violate well-established principles of international law, including respect for the territorial integrity of states — constitute an unusual and extraordinary threat to the national security, foreign policy, and economy of the United States. I hereby declare a national emergency to deal with that threat.

During a public address, Biden made it clear that what the U.S. wants is a "stable, predictable relationship" with Russia.

President Biden announces actions against Russia: "We want a stable, predictable relationship. If Russia continues to interfere with our democracy, I'm prepared to take further actions to respond." pic.twitter.com/wVBbdSS81f

Nevertheless, almost two weeks later, Tucker Carlson took a break from his white supremacist lies to host Glenn Greenwald on the topic of Russia. Lately I haven't even bothered to expose Greenwald's lies because he's gone so far over the edge as to actually become a caricature of his former self. But during this particular conversation with Carlson, he employed a couple of arguments that could sound reasonable to someone who doesn't know the facts and history. So let's take a look.

While it is always important to point out the ways that foreign policy in this country has gone off the rails, one of the consistent themes from people like Greenwald is that they want you to assume that other countries have no agency when it comes to conflicts with the U.S. In this case, Greenwald blames the rising tensions with Russia on (1) propaganda about "Russiagate" during Trump's presidency, and (2) the need in the U.S. for an enemy to justify military spending.
To this day, Greenwald denies that Russia attempted to influence the 2016 election. Even when he opens that door a crack, he writes it off to the kind of thing the U.S. has done in other countries. So that explains why he would blame this country for the current state of affairs. On his second reason, there is no denying that we spend too much money on war-making. But you'll notice that the actions Biden took were diplomatic and designed to hold Russia accountable - not a call to war.
Even more importantly, Greenwald doesn't take into account how Russia has changed over the last decade. In his book, "From Cold War to Hot Peace," Michael McFaul outlined a dramatic turn in 2012. During Obama's first term, McFaul served on the National Security Council as senior director of Russian and Eurasian affairs. Then in 2012, he became the U.S. Ambassador to Russia. Here's how he described what happened from 2009-2012.

Several months before Obama’s inauguration, Dmitry Medvedev took over in the Kremlin — a change we believed might help us “reset” relations with Moscow. By June 2010, when Medvedev made his first visit to Washington, we were succeeding beyond our expectations: We’d signed a treaty to shrink our nuclear arsenals, jointly imposed tougher sanctions on Iran and added a supply route to Afghanistan through Russia, reducing our reliance on Pakistan. Soon we would help secure Russia’s membership in the World Trade Organization.

Coinciding with McFaul's appointment as ambassador in 2012 was an election in Russia. Vladimir Putin was once again elected president (he had previously been president from 2000-2008). Just prior to that election, massive protests erupted in Russia over a falsified parliamentary election. Here's how Putin reacted:

To rally his supporters and undermine the protesters, Putin would need an enemy, and he turned to the most reliable one in Russia’s recent history: the United States and then, by extension, me. As soon as I became the new proxy for Washington, Moscow launched a full-scale disinformation campaign alleging that, under my direction, the United States was funding the opposition and attempting to overthrow Putin. State propagandists and their surrogates crudely photoshopped me into pictures, spliced my speeches to make me say things I never uttered and even accused me of pedophilia.

To understand more recent Russian history, it is important to know what happened after the break-up of the Soviet Union.

[I]n the chaos that followed the collapse of the Soviet Union, the state-owned assets and resources of the superpower were snapped up by a tiny group of smart, ruthless, ambitious and well-connected men, who abruptly joined the ranks of the very richest people in history...

The oligarchs, not content with buying companies, villas, yachts, planes and the most beautiful of Russia's beautiful women, also bought power. In 1996, they connived to engineer the re-election of the politically and physically ailing Boris Yeltsin. In 2000, they helped steer Yeltsin's successor into power - Vladimir Putin, a saturnine former spook with the KGB, and its descendant organisation, the FSB.

Putin was eventually able to establish a "grand bargain" with Russian oligarchs. It allowed them to maintain their powers, in exchange for their explicit support of – and alignment with – Putin's government. Those who resisted were prosecuted (usually of fraud and tax evasion) and consigned to prison camps.

What followed was a bond between the oligarchs, organized crime, and nationalism. As Franklin Foer documented, this is the source of the money Trump's sons bragged about in the years prior to their father's campaign for the White House.

Putin further consolidated his power with an attack on truth, as Peter Pomerantsev explained.

In today’s Russia…the idea of truth is irrelevant. On Russian ‘news’ broadcasts, the borders between fact and fiction have become utterly blurred...insisting on the lie, the Kremlin intimidates others by showing that it is in control of defining ‘reality.’ This is why it’s so important for Moscow to do away with truth. If nothing is true, then anything is possible.

By 2013, that kind of information warfare became the Kremlin's weapon of choice.

The Arab Spring, according to General Gerasimov, had shown that “nonmilitary means” had overtaken the “force of weapons in their effectiveness.” Deception and disinformation, not tanks and planes, were the new tools of power. And they would be used not in formally declared conflicts but within a vast gray between peace and war.

Those ideas would appear, the next year, in Russia’s formal military doctrine. It was the culmination of a years long strategic reorientation that has remade Russian power, in response to threats both real and imagined, into the sort of enterprise that could be plausibly accused of using cyberattacks to meddle in an American presidential election.

That is the Russia that not only interfered in the 2016 election, but is the one President Biden faces today. To ignore the threat posed by Putin is to live in a fantasy land where the only actions that matter are the ones taken by the United States.

This isn't the Cold War redux for anyone but Vladimir Putin, who wants to return to the Nineteenth Century "Great Powers" politics that led to world wars. That is why, when Russia invaded Ukraine in 2014, President Obama gave a speech in Belgium to garner Western European support for sanctions. It was a powerful defense of the liberal international order established following World War II.

So I come here today to insist that we must never take for granted the progress that has been won here in Europe and advanced around the world, because the contest of ideas continues for your generation. And that’s what’s at stake in Ukraine today. Russia’s leadership is challenging truths that only a few weeks ago seemed self-evident -- that in the 21st century, the borders of Europe cannot be redrawn with force, that international law matters, that people and nations can make their own decisions about their future...

[O]ur enduring strength is also reflected in our respect for an international system that protects the rights of both nations and people -- a United Nations and a Universal Declaration of Human Rights; international law and the means to enforce those laws. But we also know that those rules are not self-executing; they depend on people and nations of goodwill continually affirming them. And that’s why Russia’s violation of international law -- its assault on Ukraine’s sovereignty and territorial integrity -- must be met with condemnation. Not because we’re trying to keep Russia down, but because the principles that have meant so much to Europe and the world must be lifted up.

Obama wasn't threatening war. But he was very clear that Russia needed to be held accountable for breaking international law that protects the rights of both nations and people.

That is precisely what President Biden is doing again.